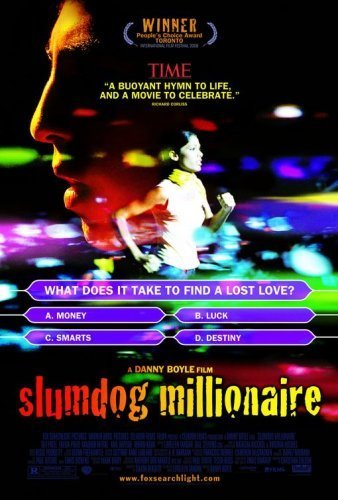 Plot: An orphan from the slums is one question short of winning 20 million rupees on India's "Who Wants to Be a Millionaire?" when he is whisked away by police who suspect him of cheating. By telling the story of his life, he explains every answer he has given - but there is much more than money on his mind. -- Chris Kavan

As inspiring as this India-set rags-to-riches story is, the plot feels very improbable and the uplifting moments hold little water when mixed in with the excessively gruesome ones.

An orphan from the slums is one question short of winning 20 million rupees on India's "Who Wants to Be a Millionaire?" when he is whisked away by police who suspect him of cheating. By telling the story of his life, he explains every answer he has given - but there is much more than money on his mind. This movie has won 8 Oscars and to me that is okay but I think the dark knight should have won more.

Danny Boyle continues to reinvent himself. Slumdog Millionaire is an example of pure, old-school filmmaking, transposed into impoverished India. The director tells a classic story of love, revenge, and redemption, using mostly unknown actors and settings. The result is an emotionally-charged and, ultimately, triumphant and brilliantly staged film, easily the best film of 2008 and fully deserving of its Best Picture Oscar.

"Slumdog" Jamal who grew up on the streets of Bombay is at the brink of winning the grand prize of India's version of Who Wants To Be A Millionaire when is is "questioned" by the police suspecting fraud. Danny Boyle's latest and highly acclaimed project has a lot of the energy that marked his debut. The clever structure of the film uses his explanations on how he knew the answers to fill in the background of what life is like for the most impoverished members of Indian society, brutalized in religious riots, either ignored or harassed by the authorities and exploited by criminals. In this way it's like a more light-hearted and less violent version of City Of God and has a modicum of the power and grittiness of that film. Some of the more disturbing aspects of what these kids go through …

A foreign film based on the manipulation of a game show and the love of 2 individuals. Obviously, the cinematography of the film really brought out the âslumâ areas of India. It likewise showed how BPO (Business Process Outsourcing) companies have been booming in the said country. The movie focuses on the life Jamal Malik (Dev Patel), a former street child who was given the opportunity to play for Who Wants to Be a Millionaire. Jamal and Latika (Freida Pinto) became close, but eventually they lost touch after a gangster/train related incident. The character build-up was respectable, music of course was suitable and the dialogue/script was efficient. This could have been an instant classic for me if the realism was present and that the coincidence of the answers were not …

I Knew You'd Be Watching

This may be my favorite movie of all time. And I know what you're thinking, "He's into over-hyped, indy crap whose favorite band is the Jonas Brothers." You would only be partly right. I will give anything a chance, over-hyped or not. And no, the Jonas Brothers suck. So, on with the review:
Danny Boyle, though not filled with movies I particularly LOVE, has a portfolio both impressive and varied. Horror films, off-the-wall comedies about drugs and all that, well, was he the best man for the job? After seeing this incredible film: YES!
Dev Patel and Freida Pinto are young and in love in this movie and I believed it. I believed everything in this movie as it portrayed one of the hardest lives that a young man could live while at the exact same time asking me seriously …

I thought it was OK but a bit tedious and predictable. After the clever premise sinks in it was very average and too long.

I thought it was a good movie. I don't know if it was 8 Oscars good, but it was good. The love story was cute, predictable at times, but&amp;nbsp;sweet in the end. And the&amp;nbsp;older brother Salim...ugghh..I loved &amp;amp; I hated him at the same time. Reminds me of a couple of people in my family. hehe..But overall, I enjoyed everything about the movie. It was worth the&amp;nbsp;$10 ticket, large soda, refillable&amp;nbsp;popcorn, &amp;amp;&amp;nbsp;squeaky seat.

Although it wasnt my favorite, it totally deserved the wins!amazing movie. just, awesume. 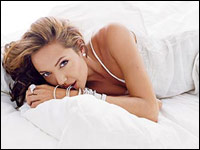 this was a great movie!! It definitely deserved the awards

I have been to third words countries and I have seen the poor first hand. A movie isn't going to make me a bleeding heart. I have done real work with the poor which is probably more than you can say. So listen boy wonder they could have made a better movie called &quot;Let's Get The Fuck Outta Darfur!&quot; and had Leo (your favorite actor) getting refugees out of the country and putting them up in his 5 star hotels and drive his expensive cars. It does not amaze me that the same people who applaud for &hellip;