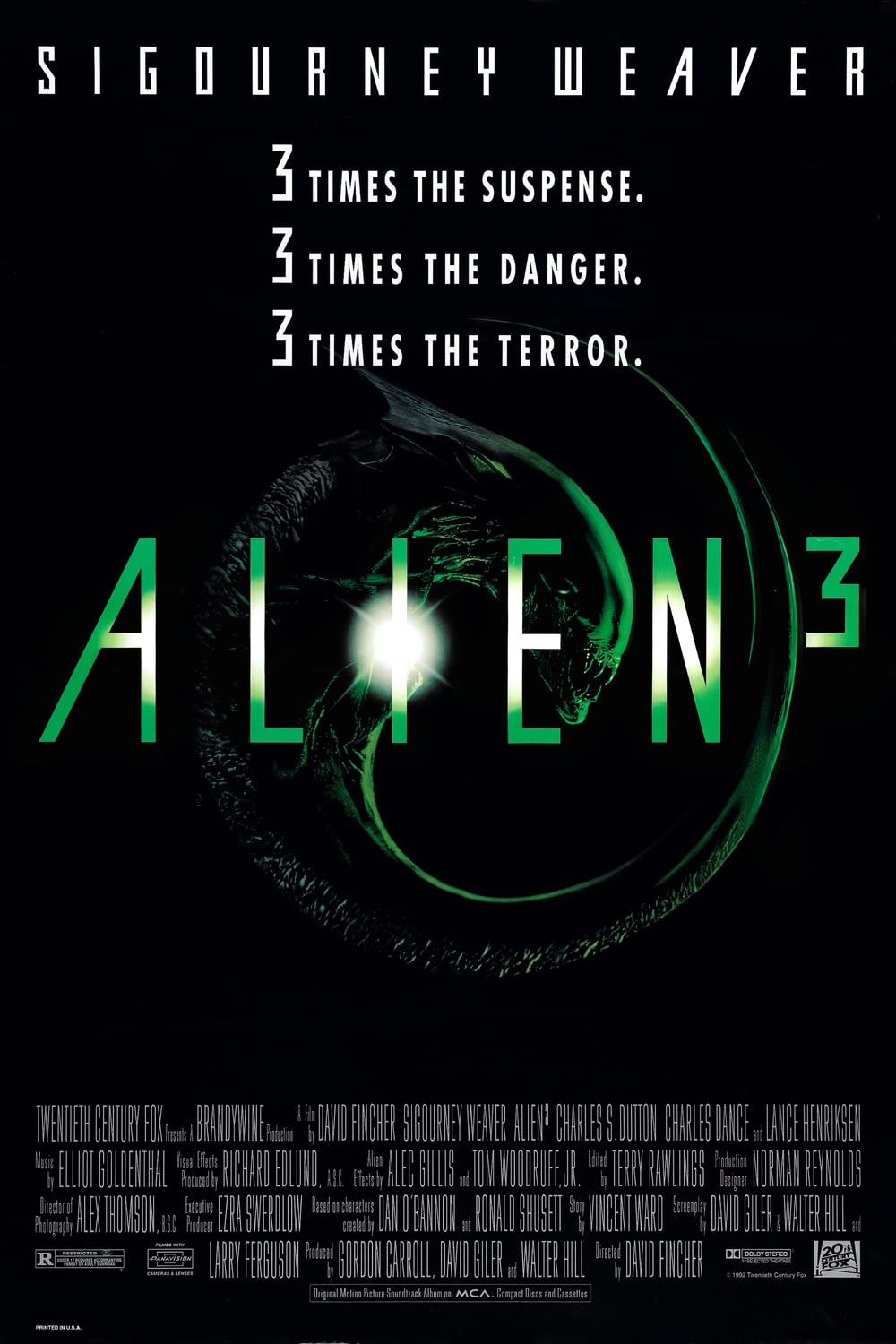 Plot: Ripley survives a crash landing on a planet ran by criminals. She soon finds that an alien stowaway caused the crash and is once again killing off the humans but that's not the only threat to her this time. -- Chris Kavan

Oh my god I have to review alien 3 game over man game over.alien 3. this movie is just a terrible film it has a weak plot and you see the alien a lot in this movie.the visual effect's look wooden in this movie and the ending is just playing awful.

Not even in the same league as the first 2, but this isn't a bad film by any means. I strongly disliked the cgi in this film. Honest to God, the alien looked like a cartoon running around; it really took away from the experience. Still plenty to enjoy here though.

This third part of "Ripley's great adventures!" is kind like Metallica's Reload. Now, the only objection coming from me is the use of early CGI in some of the scenes. I saw it bursting from that dog, bursting from that other animal... It is not that important. The prisoniers play is good, it sticks. Back to one alien, Newt dies, Hicks is dead, and this is the trick that makes it a sequel more then anything: it is a science-fiction horror trilogy! Scary, scary, scary!

When an alien presence causes the Sulaco to eject the cryo tube chamber, it crash lands on a obscure technologically backward all-male prison colony. The third alien film was not particularly well received at the time, most citing David Fincher's inexperience as a feature director as prime culprit. It does on occasion resemble his music video heritage, but it also has some of the very stylish and atmospheric visuals that would become his trademark. It's true it does not measure up to the earlier films, but not much does. It has some interesting ideas, namely the evolution of a different kind of alien according to its specific host, and the fact that it will not attack an organism hosting an embryo. Sigourney Weaver is as always a strong and human protagonist while there is solid support …

Alien 3 is admittedly not as impressive as James Cameron's masterpiece Aliens, but it is still one of the greatest sci-fi horror movies. This movie is actually really memorable and unique, although I highly recommend the director's cut. If you can get past the beginning where there are wasteful and unjustifiable deaths of the previous main characters, the rest of the movie is actually really well constructed. The acting is not as impressive as the previous two entities and the special effects aren't as good as Aliens, but the pacing, plot, and tension are perfect. While the first Alien felt like a slasher in space and Aliens was an action thriller, Alien 3 is undeniably a impressive monster movie. This movie has an interesting mixture of tension and graphic death sequences. The ending of …

The worst of the series

Okay, this film just absolutely depressed me! Being a huge fan of Aliens, I obviously wanted to see this one but it just came as a complete slap in the face. If you really don't want to know anything then stop reading but this does only happen right at the start. The fact that they killed off Newt and Hicks basically just because they didn't know what else to do with them, really didn't go down well with me. We followed these characters through a whole movie and were grateful that they survived only to not even see them die within the first 5 minutes of this film. I understand that they wanted Ripley on her own again but I'm sure they could have found a different way of doing it.

And if that wasn't bad enough, the movie itself isn't even good. The characters go back to being fairly …

No posts have been made on this movie yet. Be the first to start talking about Alien 3!