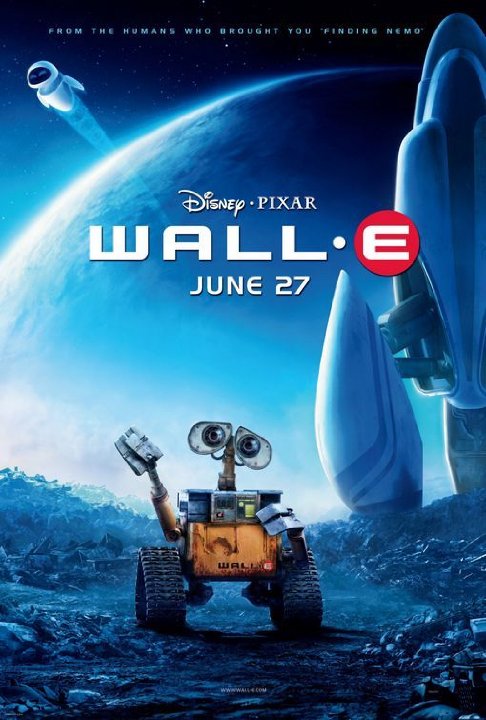 Plot: An animation in which Wall-E is maintaining the destroyed, dirty, and ugly earth. His robotic job is to clean it. He is a curious sort. One day, another robot is also sent to planet earth. Wall-e believes he may have fallen in love. This story is about the relationship and adventure of two robots.

There are scenes that last several minutes in Pixar's "WALL-E" that are done without a bit of dialogue. Yet, its message couldn't be clearer and its love story couldn't be more defined.

Just get through the first part the movie, it's a bit slow to start, but the second part is awesome! Who knows, maybe that's how we will turn out, anyway it makes you wonder ;) Wall-E, a courageous little robot just wants to do his job and deliver what could change how humans have been living for centuries...

He is a curious sort. One day, another robot is also sent to planet earth. Wall-e believes he may have fallen in love. This story is about the relationship and adventure of two robots. A lot of people were mix about this movie because they said there liked the first 30 minutes but when there got to the space ship there said it went down hill till then, and I didn't see what was all the fuss, because I thought this movie was amazing. The animation was colorful and beautiful to look at, Wall-E reminds me of johnny 5 from short circuit.

A robot doing the cleaning of a ruined earth, segregating wastes, putting things into order, suddenly becomes a key to the renewal of earth as another robot was sent to the planet in search of a plant.

***
Wall-E is not just a cute movie, it created a statement on how humanity becomes after the advent of industrialization and technological advancements. The film, strengthened by good visuals and audio mixes, presented a good material and brilliant executions. Although I thought, at first, that it would be like a silent film (the robot can't talk), at some point, it was boring. I also did not like how they injected an antagonist. I think it would be better, if it focused on being a feel-good movie instead of putting conflicts which, for me, is not really necessary.
Over-all, it was a …

It's been years since I've seen Wall-E. I remember enjoying it, just like the rest of the Pixar bunch, so I got it via Netflix to see again. A wise choice. Wall-E is even better than I remember it.

Wall-E is an ingenious film that occurs thousands of years in the future. Humans no longer live on the Earth due to pollution, they instead live in a giant spaceship, called the Axim. The Wall-E robots are left at Earth to clean up the mess. All of the Wall-E's, however, have been wiped out over time. Only one remains. But when EVE, a robot from the Axim, comes to Earth to find life, Wall-E's life is flipped upside down.

The first half-hour of the film is performed with minimal dialogue, but still mananges to express all kinds of emotion: Laughter, loneliness, perhaps even sadness. I …

The Earth has been abandoned by the human race and a lone robot is left behind to tend this interplanetary garbage dump. I'm fully aware that I'm not the intended audience for this kind of thing, and I'm sure kids love the character of Wall-E. But for me, he is easily the worst aspect of this film and brings nothing to the story but the usual weak slapstick and sappy sentimentality I've come to expect from cartoons. Not to mention the fact that whenever he's on the screen the dialogue is nothing but "Eva...?" Wall-E!" "EVA!" "WALL-E!!" etc etc ad nauseum. For this reason I very nearly didn't get past the first half an hour of this film as it contains nothing but. Once the story gets going however, it's quite an enjoyable little sci-fi fairytale involving a human race that has become a …

No posts have been made on this movie yet. Be the first to start talking about Wall-E!