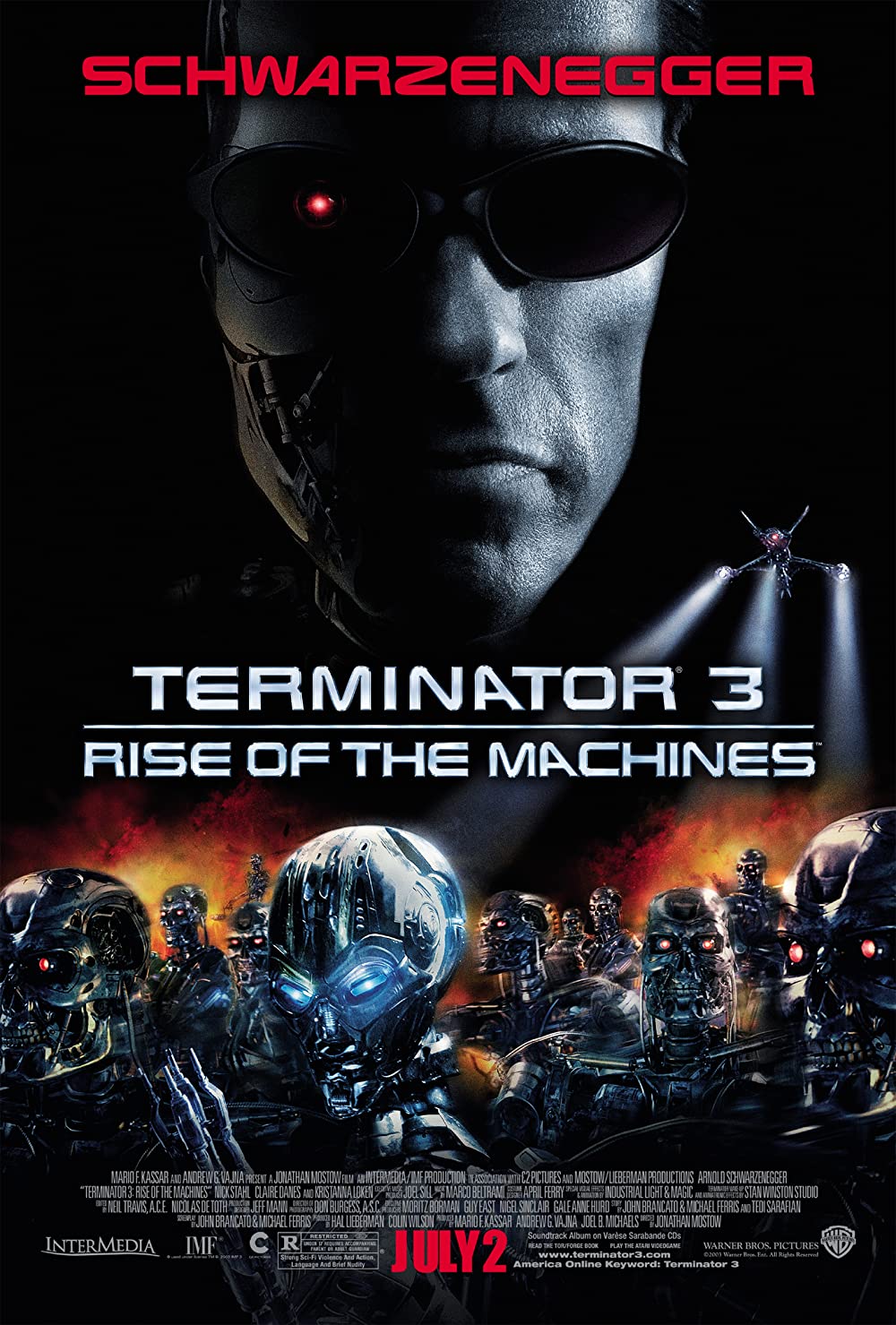 Plot: Thinking he had changed the future, John Connor is now living "off the grid" but Judgement Day is still coming and a new female cyborg has been sent to kill him while an obsolete model is sent to once again protect him.

Silly entry into the series, full of lackluster action sequences, ridiculous dialogue, and a complete disregard for the gritty weight of practical effects and interesting characters the first two films carried.

Not quite as good as the first two, or even the fourth one. Still, its worth a shot.

Adds nothing new to the series at all. The plot is basically a re-hash of 'Terminator 2'. While not as thrilling, groundbreaking, or even compelling as the previous films, it still ends up being an average action movie. Some of the fights and chases are cool. Arnold is fun to watch. I'd give it an above average score if it had a better villain Terminator.

Ten years have passed since John Connor (Nick Stahl) helped to blow up Cyberdyne Systems and stop Judgment Day. Now in his 20s, heâs a homeless person living on the street where his only survival is his strength and eating off medicine at a local stray pound. His mother Sarah Conner (Linda Hamilton) is dead so the kid's got nobody else left and he is still targeted for termination. This time his would-be assassin is a gorgeous though deadly "Terminatrix" (Kristanna Loken) sent back to try and accomplish what the last two males could not succeed at doing.

The concept of a female terminator worked well, adding sex appeal and the opportunity for some humor amongst the carnage. And once more John finds himself the target of two Terminators: one out to protect him, the other to destroy …

"Terminator 3: Rise Of The Machines" by Yojimbo

John Connor has reached adulthood and is once more pursued by a murderous robotic assassin as he tries to prevent Skynet from starting the war that means the near extinction of mankind. The Terminator films, like the Alien franchise before them, were always going to suffer in comparison to the two hugely influential originals. Basically Terminator 3 is not in the same league as the previous films and feels far more like a generic cash in that not only fails to expand on the concepts but also seems rather pointless in general. The self referential and ham-fisted humour in particular is a serious mistake making the film look like a parody of itself and the gimmicky casting of Kristanna Loken was never going to provide the presence and menace of Schwarzenegger or even Robert Patrick. But if …

It was thought after the events of T2 that we succeeded in escaping judgment day. Of course that could never be the case as the terminators could only exist in a post-judgment day world. Terminator 3: Rise of the Machines takes place several years after T2 and follows John Connor as the machines have sent a new cyborg back in time in an attempt to eliminate him and his future lieutenants. As before, Arnold Schwarzenegger returns to ensure the survival of John Conner at all costs.

The filmâs main flaw is how closely it follows the formula of T2. It also doesnât help that its star is a rather unlikable and annoying character. Our enemy terminator here is portrayed by Kristanna Loken. I suppose the idea to have a female terminator is in an attempt to add sex appeal to the franchise. …

No posts have been made on this movie yet. Be the first to start talking about Terminator 3: Rise of the Machines!