Strangers on a Train Movie Information 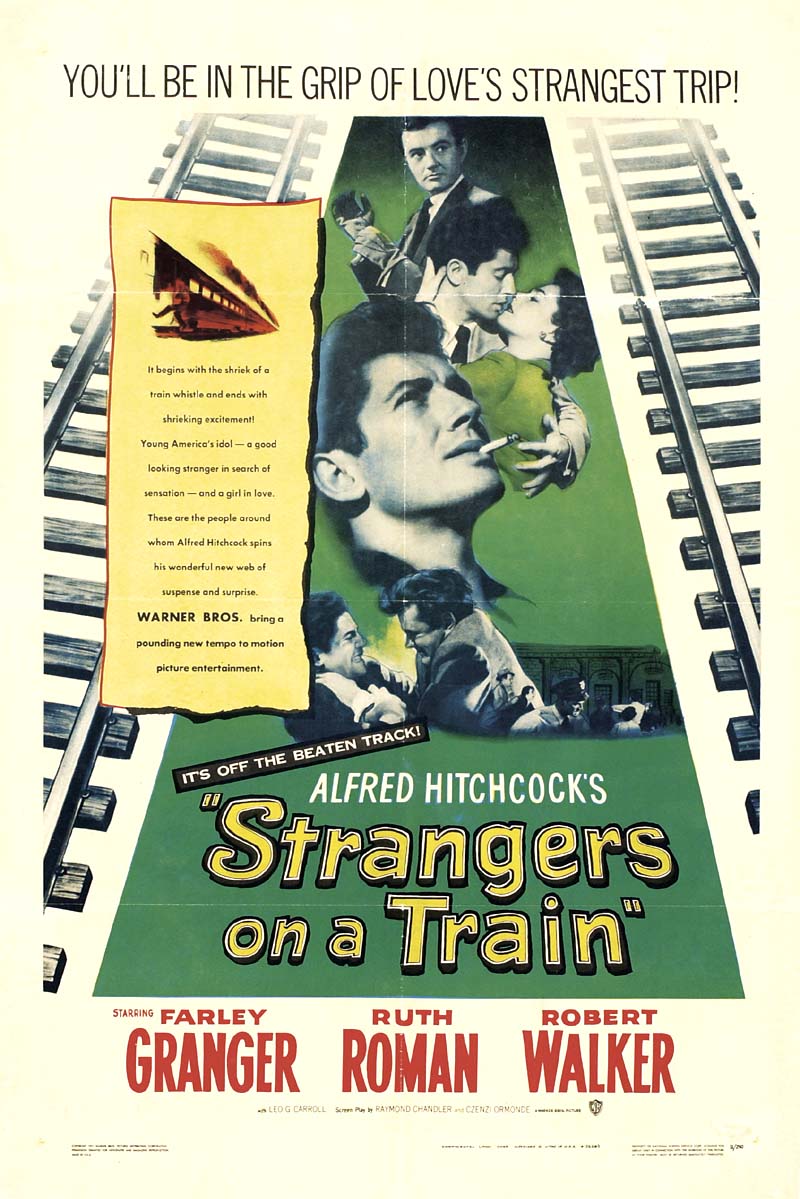 Plot: A man develops a theory of how complete strangers can get away with murder, and tells a tennis star of his intentions. Who will go through with what?

'Strangers on a Train' provides one hundred minutes of pure sustained suspense. It flows like a breeze from one tense and unpredictable moment to the next. The diabolical 'Bruno' character exudes the perfect sinister edge that is felt in every scene, whether he be present or not. The sweet payoff to the endless dread is in the final 'gasp' worthy confrontation. Absolutely, one of Hitchcock's best films!

Hitchcock shows his masterful directing by developing a tense and fear-ridden thriller from the simplest of scenarios. A pedestrian setting becomes menacing and a seemingly friendly villain becomes chilling.

The central plot of people doing someone else's killing is pure Hitchcock and I believe it holds up quite well today. However, this film is does feel dated, unlike the other Hitchcock classics, Psycho, Vertigo, etc...I feel that this film is just a hair below those others.

The movie drug on just a little too long. There's no way that real police officers would just let their top suspect go, but then again, I don't know why they were following him in the first place if they had no real evidence against him. Also, the fact that they never even felt the need to question Bruno bothered me.

I don't think I've ever recommended something to be re-made, but this film I think could be done even better. I know that sounds like sacrilege, because this is Hitchcock that we're talking …

"Starngers On A Train" by Yojimbo

A tennis player encounters what he assumes is an eccentric but harmless stranger, but when the man actually follows through on his hypothetical plan to "trade" murders he finds himself prime suspect and unable to turn to the police for help.

Alfred Hitchcock turns his hand to Film Noir in this tense thriller co-written by cornerstone of the genre Raymond Chandler. Combining both the crisp and attractive photography that is its hallmark with the director's typically dark humour and sense of the macabre, Strangers On A Train is a murder mystery with a twist; that we know who the murderer is all along but the trick is in how to prove it. The cast are all very effective, particularly Robert Walker who is wonderfully creepy as the amusingly camp psychopath who plagues Farley Granger's …

Strangers on a Train review

Thoroughly captivating from start to it's wonderful ending. One of the underrated films from The Master of Suspense. Bruno Anthony (Robert Walker) meets a tennis player named Guy Haines (Farley Granger) on a train. The two get close, Guy shares his fatherâs negative perception, got kicked out for drinking and gambling. Guy tries to talk civilly with Miriam about the divorce but quarrels in the process. He calls Anne Morton (Ruth Roman) to show his disgruntlement with the encounter. Bruno follows Miriam (Laura Elliott) in a carnival with 2 male friends. Collins meets Guy on a train during the murder. Barbara recalls her encounter with Bruno.

Clearly one of the directors best screenplays with a few wonderful quotes: Bruno â âIâve got a theory; you should do everything …

No posts have been made on this movie yet. Be the first to start talking about Strangers on a Train!