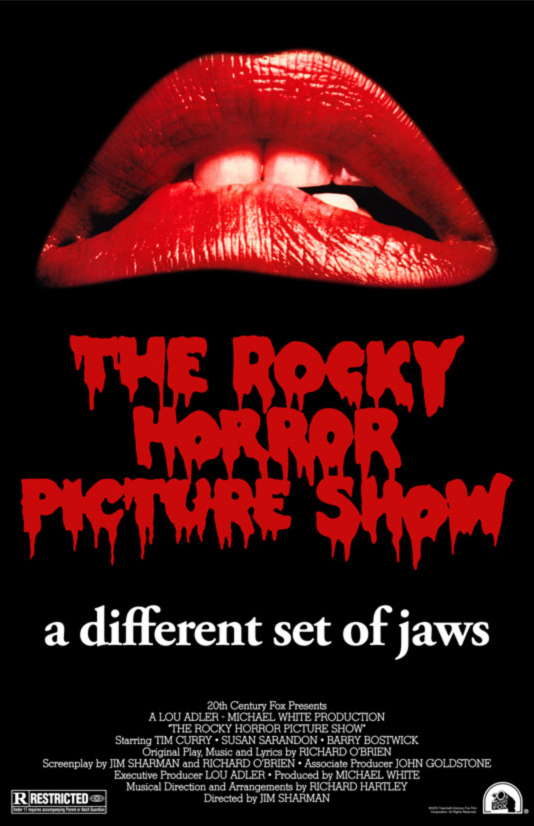 Plot: A couple's vehicle breaks down and they are forced to contact some one don't even know when the couple are instituted in a weird place.

Bizarre and way over the top, "The Rocky Horror Picture Show" is a must see for anyone who is a fan of campy cult classics.

This movie is my all time favourite movie. It is a parody of the horror genre. Throughout the film there are plenty of catchy songs and elements that are remembered by everybody. it definitely is a film that you need to watch more than once to really appreciate the film entirely.

The story is about a couple's vehicle breaks down and they are forced to contact some one don't even know when the couple are instituted in a weird place. This movie was fun musical that I still got the songs stuck in my head.

When my friend introduced me to The Rocky Horror Picture show, I thought she was crazy. After watching it, I realized that the movie was better than it sounded.

The story is strange, but wonderful at the same time. Actually, to be blunt, the story makes absolutely no sense. At times, I don't even know what's going on, but in the end I watch the movie over and over because the characters, interaction, and music through the movie are amazing. The signature dance "The Time Warp" is very catch and easy to dance to.

The characters don't make sense half the time either, but their interaction is amazing. I love the way the characters look on screen, even if some of the costumes, songs, and character reactions make me feel a little uncomfortable.

I'll be honest, although the story and …

Oh, what a bizarre movie this is. I was reallyy confused about how I liked the movie for at least six months. My initial reaction was, "This is the biggest piece of garbage I've ever seen!" but there was still a part of me wondering if it really was that bad. So I watched the movie again. And I'm honestly glad I did. Let's get one thing perfectly clear. This is not a movie for sane people. If you're expecting anything that even comes remotely in the vicinity of normal, you really shouldn't watch it. It's a story that involves many things. Those things include: a transvestite alien, a pair of incestuous household hands, a flat tire, a radio broadcast of Nixon's resignation speech, and a group of very, very weird and strangely-dressed individuals randomly bursting into song and dance. Plus …

brilliant film with a good cast and good music plot A newly engaged couple Janet and brad have a breakdown on there home from a friends wedding they up at an isolated area and must pay a call to the bizarre residence of Dr. Frank-N-Furter to use a phone.

visitors from the planet Transsexual. Frank-N-Furter unveils his creation, a young man named Rocky, who fears the doctor and rejects his sexual advances.

When Frank-N-Furter announces that he is returning to the galaxy Transylvania, Riff Raff ( Richard O'Brien ) the butler and Magenta the maid declare that they have plans of their own.

With great song such as the great Time Warp and Meat Loaf making a short appearance as Eddie.

1 The Criminologist: And crawling, on the planet's face, some insects, called …

No posts have been made on this movie yet. Be the first to start talking about The Rocky Horror Picture Show!