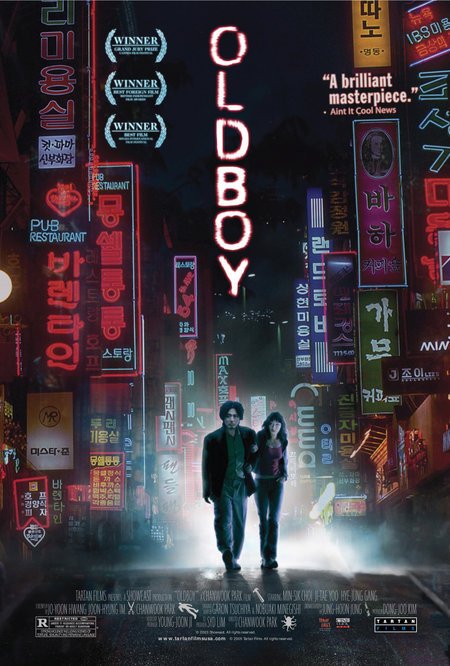 Plot: After 15 years of imprisonement, a man is abruptly released and given 5 days to find his captor. As he gets closer to the truth, he finds that his ordeal is far from over.

A movie as depraved, disturbing, and unpredictable as everyone says. It's also just as great.

Oldboy is a fantastic originally revenge movie with a gritty tone and some hard to watch scenes. Now that's what I call a revenge story and movie.

'Oldboy' is a uniquely stylized and crazy film that defies any genre classification. Utilizing striking direction, supreme violence, and traces of black humor, every scene entertains in a new way. The mystery driving the story is completely involving. You never know what is coming next, right up to the final moments. The finale to the 'villain's' plan is unexpectedly twisted. Gathering the motives and resolution from both sides of the situation leaves much to be said about the act of vengeance and the terrible effect it bestows upon one's enemy.

This movie is like that new car smell. It's so refreshing to have something new and intense, taking a detour from all those cheapskate thrillers that were filmed on a Hollywood backlot and cost ten dollars to make.
Oldboy conveys all the elements necessary in a smart thriller. Acting, script, direction.
The lead in this movie, Choi Min-sik, is an amazing actor. The rage, emotion, taunt and desperateness he brings to his character make him so likable and drive the story forward with great ambition for both the audience and the character. His performance is honestly Oscar-worthy, too bad the Academy doesn't nominate foreign films for anything other than the Best Foreign Film …

It is based on the Japanese manga of the same name written by Nobuaki Minegishi and Garon Tsuchiya. Oldboy is the second installment of The Vengeance Trilogy, preceded by Sympathy for Mr. Vengeance and followed by Sympathy for Lady Vengeance.
The film follows the story of one Oh Dae-su, who is locked in a hotel room for 15 years without knowing his captor's motives. When he is finally released, Dae-su finds himself still trapped in a web of conspiracy and violence. His own quest for vengeance becomes tied in with romance when he falls for an attractive sushi chef.
The film won the Grand Prix at the 2004 Cannes Film Festival and high praise from the President of the Jury, director Quentin Tarantino.Incredibly well made , well shooted, well written and well done movie.Absolute stunning …

Daesu Oh is a drunk and a philanderer but otherwise a fairly typical husband and father, until one day he is kidnapped and imprisoned in a cell for 15 years with only a TV set for company and no word of explanation. One day he wakes up on the outside with only a wallet and a phone, and he sets out on a single-minded quest to find out why he was imprisoned and extract bloody vengeance on those responsible. The second part of the Vengeance Trilogy by Chan-wook Park, Oldboy is a bizarre and brilliant film. It constantly wrong foots you and messes with your perceptions, and contains the kind of revelation that makes the kind of so-called plot "twists" of most films look gimmicky and inane. This is the kind of film that blows you away and makes you realise you've been watching the WHOLE THING …

Top Ten Films of 2005 by KingoftheCorn

No posts have been made on this movie yet. Be the first to start talking about Oldboy ( Oldeuboi )!