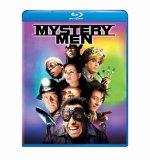 Plot: Captain Amazing has cleaned up the streets and defeated almost every evil villain when he is taken hostage and the only hope of his rescue is by a small group of armature superheros.

Delightfully cartoonish and fun to watch. It isn't brilliant by any means, but in this age of superhero obsession, I kind of wish "Mystery Men" would garner some kind of cult following.

Feels kind of like '97 Batman and Robin film, except it's funny on purpose. More of a satirical approach to the cartoon-y superhero lore that felt ahead of it's time. One of the most underrated movies I know of. I still find it quite enjoyable even to this day.

A cult comedy that has a few special effects and ludicrous fight sequences. Archenemy of popular Captain Amazing (Greg Kinnear), Casanova Frankenstein (Geoffrey Rush), tries to take over the city. Mr. Furious (Ben Stiller) has the ability to have tantrums, Blue Raja (Hank Azaria) is a deadly hand with spoons and forks (but not knives) while Shoveler (William H. Macy) is good with a shovel, Spleen (Paul Reubens) fart has an effect on people, Bowler (Janeane Garafalo) has a powerful bowling bowl and Invisible Boy (Kel Mitchell) can become invisible. Well-casted, had some laughable scenes and soundtrack wonderful. It's weak-point would be the iffy dialogues and somewhat not so menacing antagonist though Rush always delivers no matter the role. Mystery Men is a decent comedy about …

This is one of my favorite movies! Right around the time when the various movie companies were trying to start cashing in on the Superhero Genre you get a movie like this. Ben Stiller is funny as always, portraying "Mr. Furious" a man that is supposed to acquire super powers the more angry he becomes, William H. Macy plays "The Shovler" a man that is exceptional when fighting with shovels. Hank Azaria had me laughing at the point of tears a couple times as his character "The Blue Razha". Greg Kinnear is Captain Amazing, a superhero that is so good that he has product endorsements as sponsors. Ganeane Garofalo as "Baby Bowler" is as sarcastic as ever, she and Stiller play off of eachother very well, and they have had a long friendship since their days together on The Ben Stiller Show. …

No posts have been made on this movie yet. Be the first to start talking about Mystery Men!