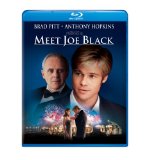 Plot: Just about to celebrate his 65th birthday, media mogul Bill Parrish meets death - literally in the form of a young man named Joe Black. Yet something happens as Black, at first only interested in taking Bill with him, instead finds himself entranced by his daughter, Susan, and life itself. -- Chris Kavan

Billionaire media mogul Bill Parrish (Anthony Hopkins) thinks about a merger. His daughter Susan (Claire Forlani) is in a relationship with Drew (Jake Weber), one of his father's staffs. Susan gets acquainted with Joe but Death has other plans. Despite its stellar cast and honest performances, the overall premise and pace just dampens the overall film. Meet Joe Black's length can really be felt because of the uninteresting plot and lack of a likable figure.

A slow burn of a movie with a solid and believable cast and a brooding and introspective take on life and death. Some of the symbolism and fantasy moments play as obvious, but the "real life" storylines ground the film and give it an emotional core.

Meet Joe Black is a phenominal movie about a wealthy Bill Parrish ( played perfectly by Anthony Hopkins) who is about to celebrate his 65th birthday when he is visited by a mysterious stranger (Joe Black) played by Brad Pitt. That mysterious stranger turns out to be Death that has come to take Bill's life. But the plot thickens when Joe Black falls for Bill's beautiful daughter played by Claire Forlani. Death has agreed to give Bill more time on earth if Bill will be his guide on earth for a while. The performances by Hopkins and Pitt are Oscar-worthy and the direction by Martin Brest is as good if not better than his previous endeavor ( Scent of a Woman #3 on my Top 100). The movie is a little long (3 hours) which is the reason I give it 3 1/2 stars and rank it 19th in my Top 100. Still …

No posts have been made on this movie yet. Be the first to start talking about Meet Joe Black!