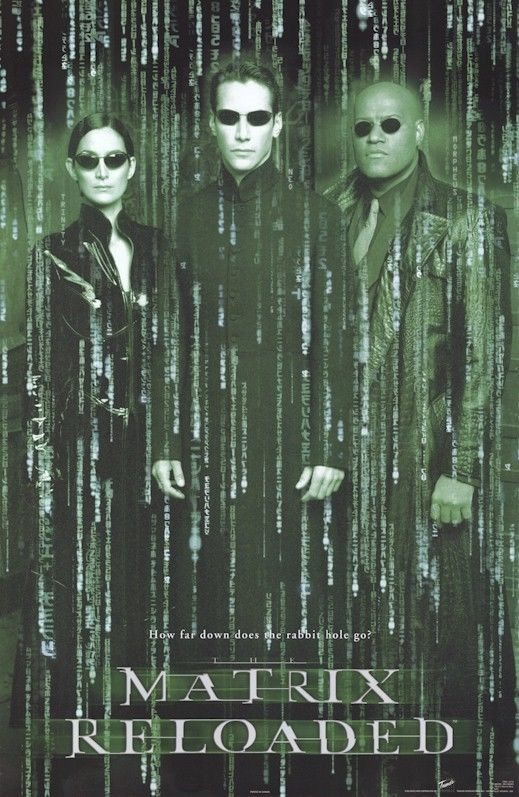 Plot: Neo's abilities are growing in power, more humans are waking to the "real world" and Zion begins to fortify itself against a mechanical army. Meanwhile Agent Smith, "freed" by Neo, begins his own mission to make the Matrix his own.

Pretentious sci-fi mumbo jumbo presented as a sequel to one of the most definitive movies of modern cinema, "The Matrix Reloaded" is eye-rollingly, face-palmingly bad.

The story is about Neo's abilities are growing in power, more humans are waking to the "real world" and Zion begins to fortify itself against a mechanical army. Meanwhile Agent Smith, "freed" by Neo, begins his own mission to make the Matrix his own. A action pack movie with great visual effect's but the movie is sadly not as good as the first one but still watchable.

Despite all claims to the contrary, the Matrix sequels are obviously tacked on additions to the franchise and the exposition and background needed to expand on the universe is often tiring. Still, the action sequences here are bigger and better and the visual magic is much more expansive than the first film. When viewed with the first film, it works, mostly.

"The Matrix Reloaded" by Yojimbo

Neo receives a message from The Oracle and goes in search of The Source to fulfil the prophecy and end the war with the machines. Reloaded was a massive anti-climax upon its release and it clearly suffers from being the bridge between the beginning and end of the story arc with little plot of its own to speak of. In fact the entire sequence in Zion is the same mix of pseudo political waffle and elaborate but irrelevant CGI that we endured during the Star Wars prequels rendering first 40 minutes of the film utterly pointless. Things improve when Neo re-enters The Matrix and learns of the existence of rogue programs with their own agenda who exist within, and Agent Smith makes a welcome return as an independent self-replicating villain with a grudge. But it's amazing how little the two …

The best of the weak trilogy

The fight between man and machine continues in "The Matrix Reloaded," which is probably the best of the Matrix Trilogy movies.

"Neo" (Keanu Reeves) leads the people of "Zion" in what leads to the "Agents" attacking from the surface of the planet. However, one of these "Agents" is able to make his way into the human subterannian city.

One performance that stands out, but not by much, is by Laurence Fishburne. His performance is a little lighter, and more physically demanding than in the movie prior to this one.

The fighting scenes are …

Put in the DVD player and press rewind

After I saw this movie for the first time, I knew I was going to go home, wait for it to come out on DVD, then push "pause" and "play" a billion times. I didn't care about ruining the tape because I knew that the DVD pack would soon be coming out, which I planned to buy after seeing the final clips of #3. So, "What is the Matrix"? It's a conundrum of things. Notably, the Matrix thrills you with excitement and the typical "smash-bang" philosophy, then... there's the Architect. I had to put this guy on rewind quite a few times. But after the fourth time or so, I began to understand... there's more to the Matrix than meets the eye. Although the first time I found it a bit hard to keep up with the Architect, once I brought the DVD home, I was able to sit down and find out things about …

No posts have been made on this movie yet. Be the first to start talking about The Matrix Reloaded!