The Man in the Iron Mask Movie Information 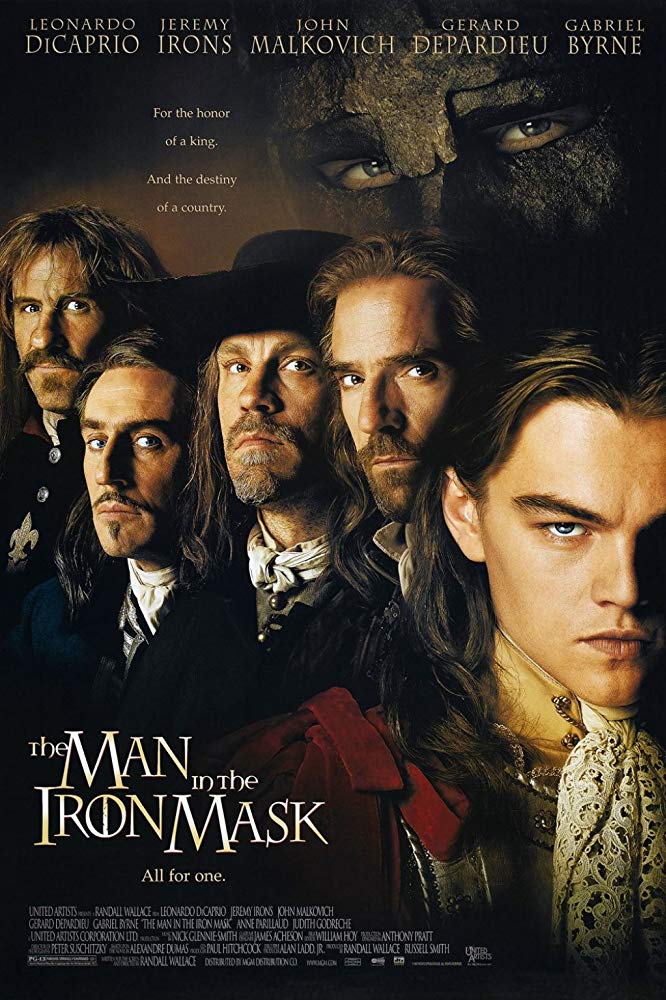 Plot: The cruel King Louis XIV of France has a secret twin brother who he keeps imprisoned.

The Man in the Iron Mask is forgettable and quite dull to watch. The cinematography and the costumes were great, but DiCaprio was no King Louis and it sucks saying that because I know Leo is better than this.

These kind of historic action/adventure films seem to be a dime a dozen around the late 90s-early 00s. Not even Leo, Irons and Malkovich can elevate this above a mediocre time. Big names doesn't always equal fun times.

Everything about it was just okay.

"The Man In The Iron Mask" by Yojimbo

Aramis, Porthos and Athos formerly of the King's Musketeers hatch a plot to replace their cold, cruel king with his good-hearted, humble twin brother, driving a wedge between they and the still loyal D'Artagnan. Fresh from the success of Braveheart, Randall Wallace's take on the story of the musketeers is a rather flawed affair. His clod-hopping direction and script are severely lacking in subtlety especially during the first act, there are some very unconvincing sets and Leonardo DiCaprio, although not exactly terrible, is clearly miscast. Judith Godreche meanwhile, IS exactly terrible. But what saves the film is the great chemistry between its veteran stars; Irons, Depardieu and Malkovich play off each other brilliantly and the slapstick, knockabout humour which owes more than a small …

King Louis XIV (Leonardo DiCaprio) is a vain selfless ruler who has a deep dark secret. Aramis (Jeremy Irons) is now a priest, Porthos (GÃ©rard Depardieu) has thoughts of suicide while Athos (John Malkovich) has difficulty realizing the death of his son. A mysterious iron masked man is imprisoned for 6 years. D'Artagnan (Gabriel Byrne) protects the King and has something to unveil with his sons. The set pieces, acting and costumes were spectacular. This could have been way better with better character development and a tad more action from the beginning instead on displaying the gorgeous castle. Story was descent was sometimes can be all over the place. It was fascinating to see Malkovich and Irons side by side acting and the comedic timing of Depardieu. Score was somewhat alright …

Loved the cinematography and costumes!

Leonardo DiCaprio plays King Louis XIV of France He is a cruel tyrant who cares only for himself and is more interested in money and bedding women. But when Louis commits an unthinkable crime by sending one of his men, Raoul to the front lines to die so he may court the man's fiancÃ©e Christine for himself, retired musketeers Athos, Aramis and Porthos played by John Malkovich, Jeremy Irons, and Gerard Depardieu hatch a plan to restore the honor of France...by replacing its king with another. Locked deep in the dungeons lays a prisoner with no name, known only as the Man in the Iron Mask. They try to enlist the help of their friend (and Captain of the King's Musketeers) D'Artagnan for their scheme. Unfortunately for them D'Artagnan feels it his duty to remain loyal to the King even …

No posts have been made on this movie yet. Be the first to start talking about The Man in the Iron Mask!