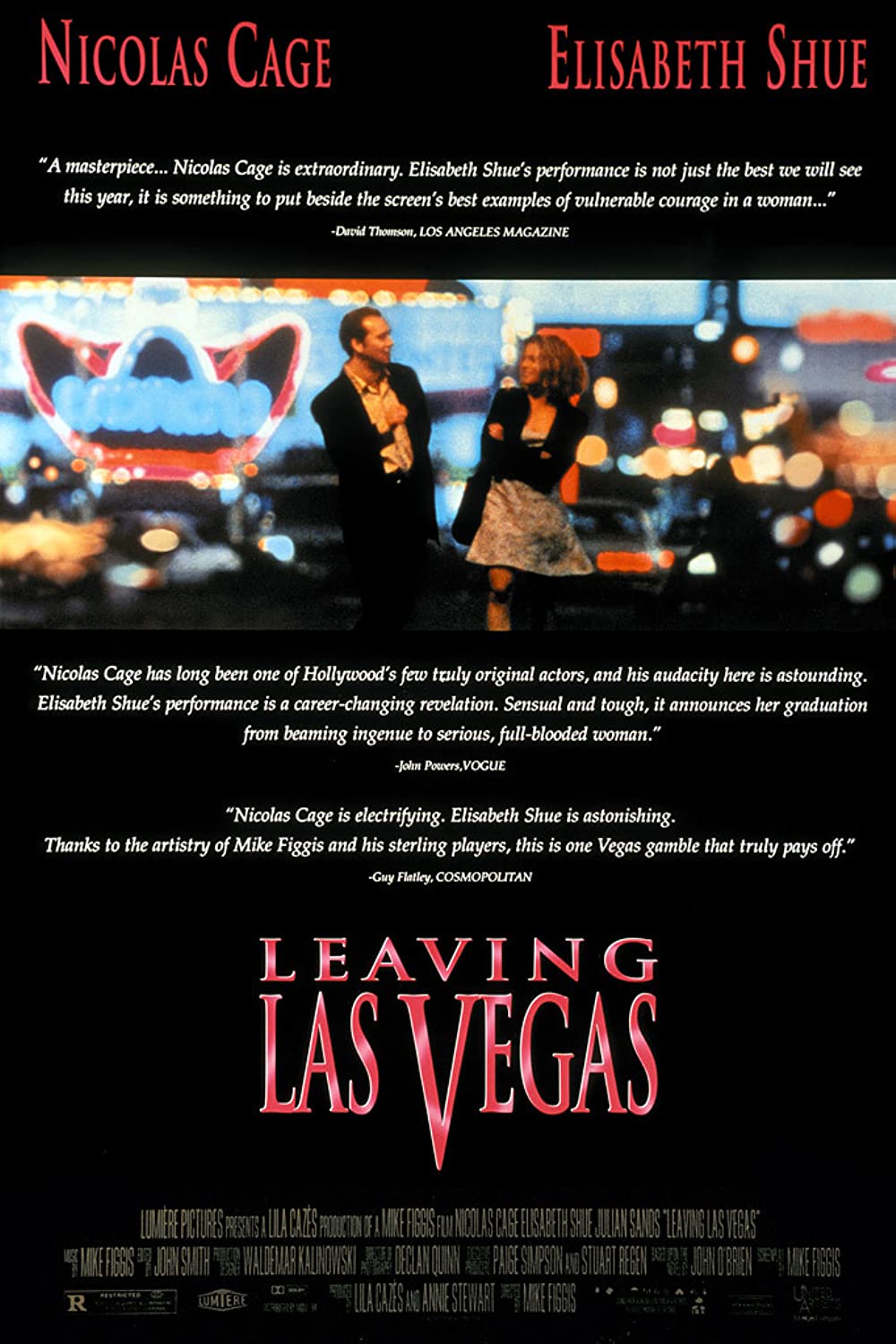 Plot: A man trying to drink his problems away winds up in Las Vegas where he meets a prostitute in a bar. The two broken souls move in together and try to find solace within each other. -- Chris Kavan

Slow moving, but at a reasonable pace that effectively depicts the descent of alcoholism.

This is Nicolas' Cage best performance - a role that appropriately channels the wild enthusiasm that Cage throws into his roles (and that, in the wrong film, can come off as overacting.) The story is tender and heartbreaking and it's a simple, yet moving, tale of recovering from addiction.

Elisabeth Shue is one of the most beautiful women in Hollywood. And, I enjoy most of her movies.

A blistering and tragic portrayal of alcoholism, Leaving Las Vegas is an emotionally draining film detailing the life of an alcoholic determined to drink himself to death and his romance with a traumatized and codependent prostitute. Both Nicolas Cage and Elizabeth give career defining performances in this flick. This isn't the kind of movie you are going to want to pull out for a rainy day and once just might be enough. Still, the times spent watching his slow descent into death is both riveting and uncomfortable. Elizabeth Shue, who made her fame in movies like Adventures in Babysitting and Karate Kid, gives a surprisingly effective turn as Sera, the hooker who tries to save him. I think the film is an amazing one with fantastic acting, interesting music and does a good job of not …

Anyone who has seen a recent Nicolas Cage film should watch this one. He gives his finest performance in Leaving Las Vegas and was handsomely rewarded with the Best Actor Oscar. Obviously, Cage has had his troubles in recent years, making many awful films and the occasional decent one. However, this film proves once and for all the he is a great talent who only needs to be more selective in his roles. His chemistry with Elisabeth Shue is electric and its hard to imagine anyone else playing Ben and Sera. Shue herself gives a career making performance as the archetypical "hooker with a heart of gold".

Overall, the film is a dark journey through the depths of addiction and love. Mike Figgis did a stunning job writing, directing, and scoring the film. With a shoestring budget he …

An alcoholic whose life falls apart decides to sell up and move to Las Vegas with the express intention of drinking himself to death, where he meets a hooker with whom he embarks on a dysfunctional relationship. The ultimate expression of a love story between two people who refuse to change who they are, Leaving Las Vegas has a real European flavour to it; this is the kind of self destructive, tragic romance that is usually the proviso of the French! Some may find his affected performances (understandably) irritating, but his manic shambling/shouting repartee is actually perfect for the part of a drunk circling the pan of his life and this is surely one of his best. Elisabeth Shue is less convincing, perhaps a little too attractive and clean cut for the part she is playing and the …

No posts have been made on this movie yet. Be the first to start talking about Leaving Las Vegas!