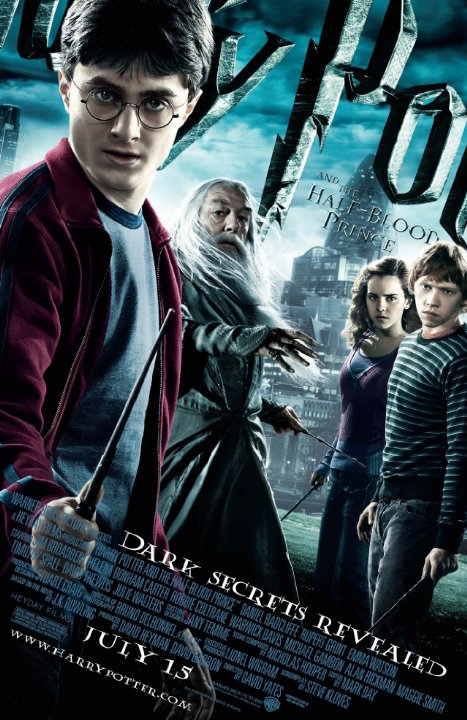 Plot: Entering the sixth year of Hogwarts, Harry Potter has a lot to contend with. While Voldemort continues his rise in power, Harry must confront the past to assure his future. And then there's relationships, Draco Malfoy and Quidditch to deal with as well.

Full of murky blues and mustard yellows, not to mention some choppy editing and scenes that are way too low lit, "The Half-Blood Prince" has to be the ugliest Harry Potter film of them all. Thankfully, the writing adds in substance what the visuals lack in appeal.

Entering the sixth year of Hogwarts, Harry Potter has a lot to contend with. While Voldemort continues his rise in power, Harry must confront the past to assure his future. And then there's relationships, Draco Malfoy and Quidditch to deal with as well. This has to be my least favorite harry potter film in the series. The movie is slow and new characters that I don't care about. the only good thing in this movie is the visual effect's and the acting and the way the movie looks.

The best film in the series, just a terrific film. Visually stunning and perfectly acted, The Half Blood Prince builds perfectly to a brilliant, emotional, and effective ending.

Harry Potter and the Super-Nap

It focused on the trivial …

I've heard that there's a bit of a conflict between the viewers, some say this is the best Harry Potter film yet, some say they were disappointed. I personally, am under the first group. Unless you can't fathom where this movie's existence came from, it's based on the sixth book in the Harry Potter book franchise. David Yates' directing makes cuts from the book, but manages to keep the more important parts in. The end result is a very emotional and dark adaptation, much like the book itself. This is what I like about these series, they gradually become darker, and more grounded in reality, and it shows the characters being able to deal with the situation. Another thing I liked was that Michael Gambon has gotten quite better as Dumbeldore since Prisoner of Azkaban. He's only going to be …

I agree, the movie does beg to be released in the summer. I'm anxious but not necessarily annoyed. I've seen all the movies and read all the books. I have high hopes for this movie even though I cannot stand how Gambon plays Dumbledore. Maybe he'll take this final chance he has to make things right.

Well of course they're releasing it when they can make more money.&amp;nbsp; Most movies are made for commercial profit.I'm not that annoyed by it.&amp;nbsp; The storyline plays more like a summer film anyway.&amp;nbsp; It's a pretty dark movie to release around the holidays.&amp;nbsp; Plus, it just means the wait between this one and first installment of the last movie is shorter.

I am also annoyed by the delay of the movie. I heard that the studio delayed it so they could make more money by releasing it in the summer, when kids are out of school.I have read all of the books and seen all of the movies, but the books&amp;nbsp;are much better (isn't that usually the case?).&amp;nbsp; I do love the movies though. I am hoping the next movie does the last book justice since it was really good. I did hear that they may make the last book into two movies since the book is really long. &hellip;

I will be honest, I have only seen the first Harry Potter flick (terrible) and I have not read any of the books.&amp;nbsp; Is anyone else annoyed by the delay of this movie?