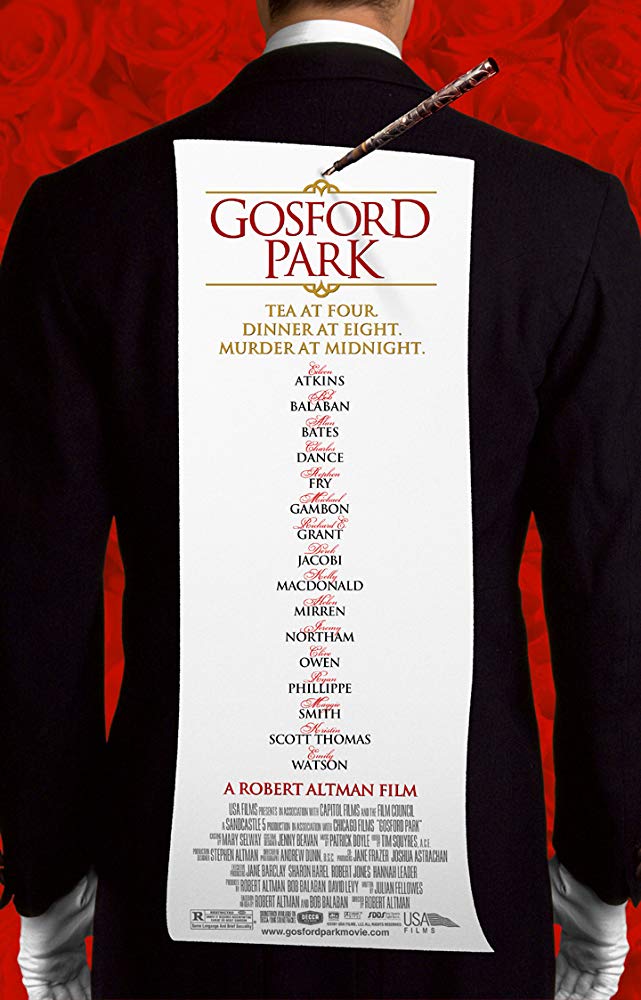 Plot: A mystery involving a party in a wealthy persons house in which the servants are upstairs and the guests are down stairs. Set in 1932.

Beaming with style and poise, "Gosford Park" is a quaint mystery-drama with a variety of interesting characters and a lot of class.

Robert Altman's signature improv-y style works well here, in a frantic whodunit that features an ensemble cast that work together incredibly well. The script is razor-sharp and full of dark comedic moments and the film manages to explore deep caste themes, while still remaining an intriguing mystery.

Incredibly witty and probably one of the best-written films of all time.

An excellent period piece. One of the best and most noticeable features of this film is great cast. There are so many big names in this film, British names to be specific...in fact basically every English actor is in this. With this in mind, I had high expectations. The cast delivered. This film is wonderfully acted, with excellent performances from everyone, especially Maggie Smith, Helen Mirren, Kristen Scott Thomas, and Emily Watson.

Another thing that really stuck out to me was how solid of a period piece this is. The film studies the British class system of the 1930's, and I really felt like I was therein the era. The sets were all stunning and elaborate, as were the wonderful costumes and props. Everything about the appearance of the film was top-notch. An extremely well made …

There are instances, much like the popular Fanny & Alexander or The Last Picture Show since it's genre is similar, wherein the critics love a certain picture and is highly regarded. This film is one of them and unfortunately, it doesn't live-up to the praises due to the a loaded cast in which the direction floats back and forth to keep up with the events occurring from day to day, uninteresting plot and likable figures. A dreary pace just kills the interest of knowing who the murderer was. It was nice to see some talents and then unknown Clive Owen, Maggie Smith and Ryan Philippe. Score and set pieces were elegant. Best lines from the movie: "They do things differently there." "We all have something to hide." There are a myriad of directors who can direct, others unfortunately …

Best Picture Nominees - 2001 by The Host

No posts have been made on this movie yet. Be the first to start talking about Gosford Park!