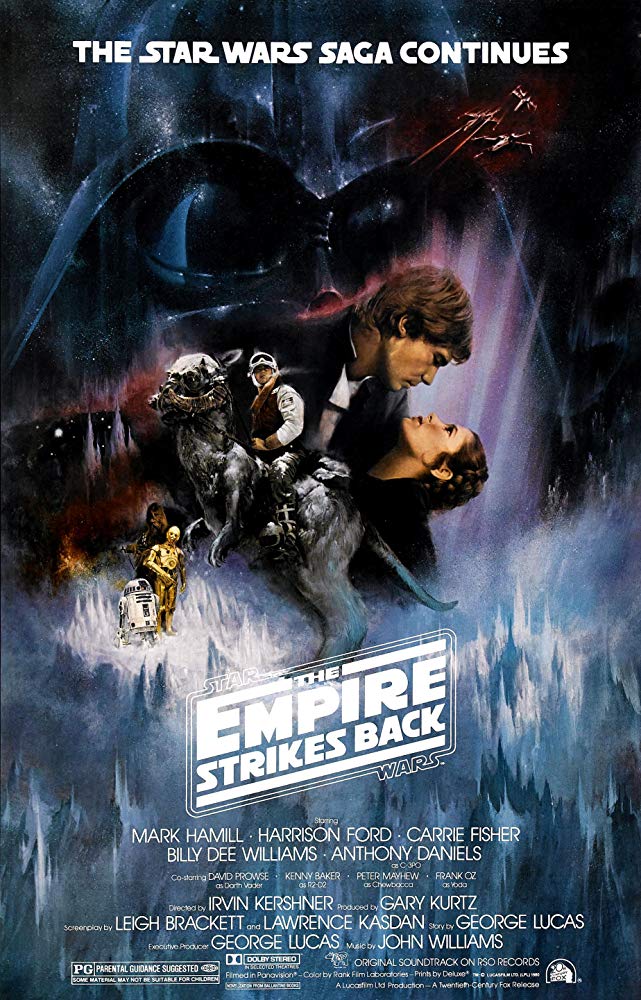 Plot: While Luke's skills improve as he becomes closer to a Jedi, he meets a green friend to help him in his journey, while Leia and Han try to flee from Darth Vadar.

Most people consider this the best of the 7 Star Wars films, and they're probably correct. It was the last of the original trilogy that I saw. I prefer Jedi, but I'm weird. If I put my critics hat on, this is the best of the 7. It's the best written, best filmed, and best acted. Really, none of these films are really acted all that great.

Best in the series - hands down. A Classic

THE Star Wars movie....hands down!

Best sci-fi movie ever made!

Empire Strikes back, simply put, just has everything that you could ever want in a sci-fi movie. The story lefts off with our heroes in a hideout away from the empire. Pretty much, the entire movie is them trying to escape from said empire, while Luke learns more about the force from a new teacher. All of this is extremely gripping and will have you on the edge of your seat. Some of the visual effects and action scenes look so real, that they can still hold up well today, you get to know more of the world of Star Wars and the force, and like the first movie, this one has some very good humor. This movie is done so well, the 2 hours go by just like that! I can think of nothing wrong with this movie that stood out to me. Not only is it the best of the series, this is movie-making at …

Okay, where to begin about Star Wars?
Star Wars was a revolutionary contribution to the medium of film for its time, exceeded all expectations then, and still exceeds them today.
And honestly, it's hard for me not to like it. It has just about everything I want to see in a fun sci-fi movie, and I understand why it is so beloved.

The director Irvin Kershner was chosen to direct The Empire Strikes Back, an odd, yet extremely effective decision by George Lucas. That was back then when he was actually making good decisions and not altering every little iconic moment in the movies that he could.
This is one of those films that is perfectly cast. I love every single line of dialogue, especially the scenes between Yoda and Luke and Han and Leia. They are the most quotable.
'Why you stuck …

"The Empire Strikes Back" by Yojimbo

The second part of the ONLY Star Wars trilogy cannot match the original for sheer entertainment, but is a rather more sophisticated story with the more adult themes of torture, betrayal and self sacrifice. Han and Leia's "will they/won't they?" romance blossoms, Luke matures from fresh faced idealist into fledgling Jedi and most importantly of all, Darth Vader, surely the greatest movie villain ever, takes his rightful place centre stage (the fact that one of the great cinematic revelations is spoiled forever is yet another reason to hate those wretched prequels). The darker tone is highlighted by the fact that the good guys are roundly beaten on all fronts in a daring move that definitely had the desired effect; I literally could not wait find out how the story would continue. Add …

No posts have been made on this movie yet. Be the first to start talking about Star Wars: Episode V - The Empire Strikes Back!