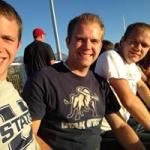 Steven Spielberg returns to the screens in a thriller starring Tom Hanks. The movie is about his character acting as a negotiator between America and the Soviet Union during the Cold War. Tom Hanks gives a performance that we just want to root for the entire movie, because he's such a great actor. Besides that, there is a lot of talking in this movie. It's similar to Lincoln in that sense, another Spielberg film. However, like Lincoln, the pacing of the movie is solid, it keeps you on the edge of your seat, and the screenwriting is great, as it provides some of those great intense parts, and it's funny as well. Some of the movie can seem pretty long, especially the dragged out ending, and without John Williams, the music doesn't …