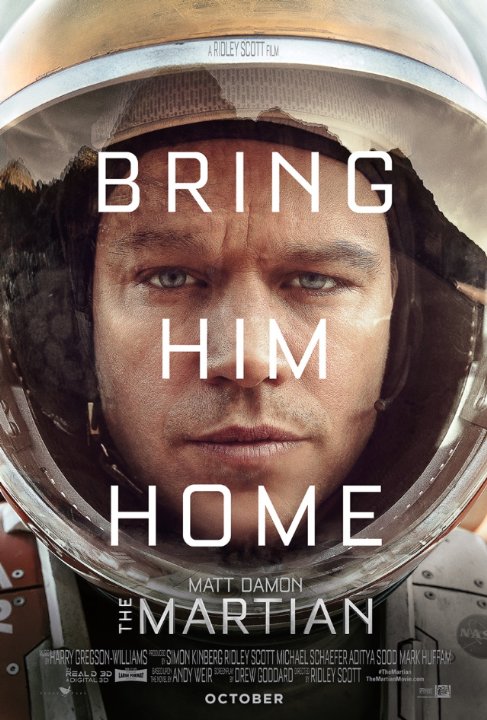 Plot: On a manned mission to Mars, Astronaut Mark Watney is separated from his party following a fierce storm and left behind after being presumed dead. But he has survived and with few supplies, he will have to rely on his own ingenuity to survive and figure out a way to Earth that he is still alive. -- Chris Kavan

Is it just me or did this feel a bit too much like 2013's "Gravity?" Either way, "The Martian" is pretty exciting entertainment.

Good film but not as good as the critics make out. the type of movie you could easily see a younger tom hanks playing. which funny enough shares 2 of his movies themes, with apollo 13 and castway. which would give you a good idea of what this movie is about, if you combine the two. matt damon is good in this. probably one of the best roles i have seen him do. he is very likeable, i love sean bean but strange casting he seemed very out of place. people say your finish the movie with a smile and tell your friends. erm i thought it was good but i wouldn't rave about it though i would class it as one of the best movies of 2015 though lets be honest its been a terrible year for good movies.

A surprisingly cheerful movie, for such a depressing concept.

âEverywhere I go Iâm the first. Itâs a strange feeling. Step outside the rover, first guy to be there. Climb that hill, first guy to do that. Four and a half billion years, nobody here. And nowâ¦me.â

Imagine youâre the first person to be alone on an entire planet. Youâre in a NASA exploration habitat that was built to last for 31 days. Your food supply is limited. If the oxygenator breaks, youâll suffocate. If the water reclaimer breaks, youâll die of thirst. If the habitat is breached, youâll implode. What do you do? How do you survive? Is it possible to make it back home? For astronaut Mark Watney (Matt Damon), dying is not an option.

"The Martian" by Yojimbo

An astronaut is assumed dead after an accident on the surface of Mars and faced with a lonely death in a hostile world, he sets about taking his fate into his own hands. Robinson Crusoe meets Apollo 13 in this "triumph of the human spirit" style drama from Ridley Scott, although his approach to the story is rather different from his usual intellectualized, "arty" norm. It has a broad streak of warm humour that counterpoints the desperation of the character's situation that really makes you root for him in his quest for survival. The film of course looks fantastic, with an obvious desire for authenticity that makes the production design pure science porn. There is a message in the story in the subtext of humanity's taking for granted the natural world that feeds and sustains us but the …

No posts have been made on this movie yet. Be the first to start talking about The Martian!