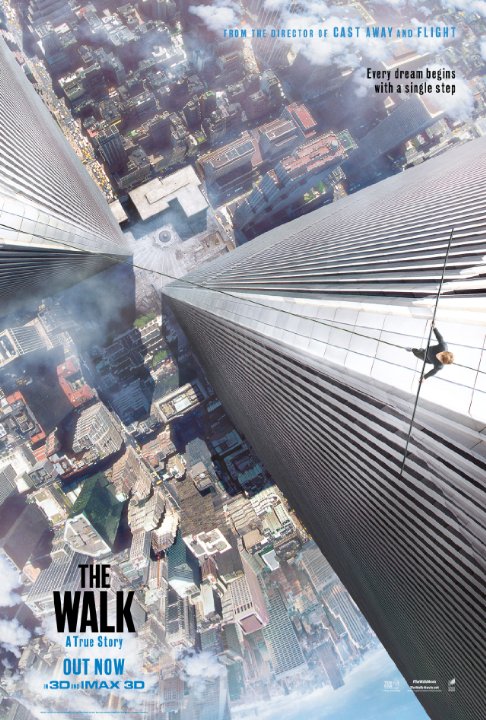 Plot: Based on the true story of Philippe Petit, a French high-wire artist, and his group of friends, who staged an unauthorized attempt to cross the World Trade Center Twin Towers in 1974. -- Chris Kavan

A multi-thematic tale accounting for the obsession, determination, fear, and madness surrounding fulfilling your dreams, "The Walk" is a breathtaking experience and must see of 2015.

Even sitting in the comfort of my living room, that walk between the towers was exhilarating and terrifying in equal measure. Joseph Gordon-Levitt is a hoots as high-wire artist Philippe Petit and the film features some amazing camera work and special effects. I highly recommend checking out the documentary Man on Wire if you liked this one. Oh, and if you're not afraid of heights yet, you will be.

I was scared shitless ...

I hope it's not the intention to make a film about every bizarre human achievement. Otherwise we'll be looking at a whole series of movies. Besides the shown dazzling images, I thought it was just a soporific spectacle. Halfway the movie I dozed off. Fortunately that didn't happen to Philippe Petit while he was swinging on that steel cord between the Twin Towers. However, there are two things about this film that stand out. First of all, the used camera technique. I myself suffer from fear of heights and "The Walk" gave me often anxiety attacks and a spinning sensation. It managed to get me as far as holding my hands in front of my eyes. You won't see me do that even during the most terrifying horror. And then there's Joseph "Looper" …

One of the Best IMAX Experiences

'The Walk' is the second best IMAX viewing experience I've ever had. The effects are completely convincing and the 3D only enhances them to even greater heights of immersion. The film's main centerpiece (walking between the twin towers) is breathtaking and anxiety inducing in equal measure. It was made all the more tense by my personal fear of heights. A unique interactive experience that you can only get from the IMAX format. The effects are great throughout rest of the film, as well. The first half plays like a sped up biopic on the man who accomplishes this mighty feat. It's handled with lots of obvious 'movie' dialogue (and narration), in which the characters continuously tell us the movie's main theme and our feelings towards it. This almost got to my nerves. Thankfully, …

I may be one of the only ones, but I thought The Walk was a great movie! Joseph Gordon Levitt stars as Philippe, who wants to tightrope walk across the World Trade Center. Although the time it takes to build up to preparing for it is kind of slow, there is a lot to like about this movie. First off, it has some great acting, particularly the french-speaking Joseph Gordon Levitt and Ben Kingsley. They convinced me that they were actual foreigners of that country. The visual effects is stunning, such as all of Robert Zemeckis' movies, not one effect felt fake or out of place. Lastly, it is an intense movie. This movie will have you on the edge of your seat when the second half of the movie rolls around, from the time that they prepare the tightrope, up until the actual act. Robert …

My Robert Zemeckis Films Rankings by The WHB

No posts have been made on this movie yet. Be the first to start talking about The Walk!