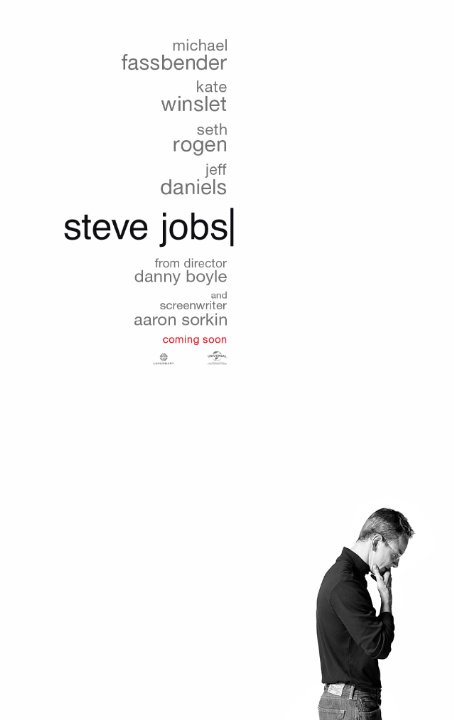 Plot: A visionary genius, Steve Jobs brought about some of the most innovative technological advances at the CEO of Apple, Inc. But his road was not always smooth, and in the race to the top bridges were burned, family neglected and even his own health was affected by his choices. -- Chris Kavan

In addition to being a definite step up from the 2013 biopic that shall remain nameless, "Steve Jobs" gets down and personal with aspects of the Apple cofounder's life while portraying him as a man with both brilliance and flaws.

Despite clocking at two hours, STEVE JOBS is a fast paced and well acted biographical drama about one of the great innovators of the late 20th century.

Call this Steve Jobs in three acts as Danny Boyle chooses to examine the Apple legend in three different years, before three major product launches (the Macintosh in '84, the NeXT in '88 and the iMac in '98). During this time we see his relationship with the people in his life - his assistant, his wife and daughter, friends and associates. The performances are certainly top-notch, especially from Michael Fassbender and Kate Winslet, but I can't help feeling the story could have gone deeper. A good movie - but not a great one.

Charting the fall and rise of the computer industry maverick behind Apple's groundbreaking and ubiquitous products, Steve Jobs is a warts and all portrait of the man. For the opening act, writer Aaron Sorkin does not pull his punches showing Jobs as an obsessive, controlling douche bag with little thought to others; including his own 5 year old daughter. The film's attitude softens over its length however, portraying him as part flawed genius, part Machiavellian businessman and even hints that he may be on "the spectrum". I'm not overly familiar with the context of the story, having never owned or indeed had much interest in Apple and their products, but Sorkin's sparkling dialogue combined with some well observed characterisation and strong performances from its leads make for an …

So I've finally got a chance to watch "Steve Jobs" over the weekend and I thought it was pretty good. Michael Fassbender and Kate Winslet both gave a terrific performance, as the chemistry between the two was convincing and enjoyable to watch. The writing and the directing is this movies biggest strength, because the movie is non-stop talking and that's what this movie really is, and I know this isn't going to be for everyone, but for me, I was engaged all the way through and I honestly can't recall being bored while watching the movie. My biggest praise that I have for this movie has to go to Danny Boyle and Aaron Sorkin, because filming and writing a movie like this isn't easy (trust me).

The problems I have for the movie are very small and many people wouldn't be bothered by this, …

No posts have been made on this movie yet. Be the first to start talking about Steve Jobs!