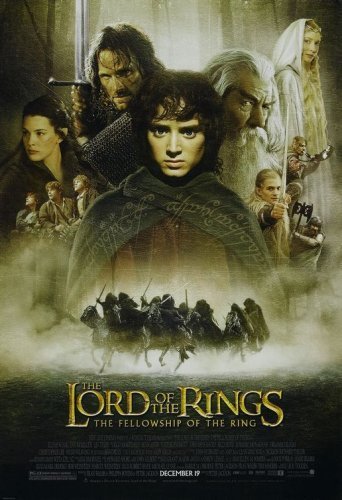 Plot: A Hobbit by the name of Frodo is entrusted with an ancient ring, which is known to be very dangerous. He, along with other heroes such as elves and men, must travel to destroy it.

Quick Review: This is a film that perfectly captures what Tolkien has to say. This whole trilogy is a hero's journey that asserts the idea that the biggest challenges facing a society won't always be solved by handing the task of finding a solution to the big guy. This film also serves as a reflection on comradery and how a group of differing souls can come together to help carry the burden of those saddled with an impossible task.

A fantasy adventure and Peter Jackson's most recognizable contribution to his craft, "The Fellowship of the Ring" begins the first part of a trilogy of modern classics.

okay it is not long until the hobbit come's out so let's review lord of the rings.lord of the rings the fellowship of the ring.this movie is a classic I mean the score and the visual effect's are amazing.

The Lord of the Rings

The Fellowship of the Ring (2001), The Two Towers (2002) and The Return of the King (2003) accumulated a total of 19 Academy Awards, 207 awards and 227 nominations, internationally speaking, in period of 4 years, including Grammies and Golden Globes. The Fellowship of the Ring received 13 Academy Award nominations for Best Actor in a Supporting Role, Best Art Direction-Set Decoration, Best Costume Design, Best Editing, …

The Lord of the Rings trilogy is unique. One may say, "I love the Return of the King and Fellowship, but the Two Towers is my personal favorite." My point is that with most film trilogies, you are gonna easily be able to isolate a favorite film out the three. The Lord of the Rings trilogy is an exception. Peter Jackson dove into this project with an intention to film the whole trilogy in one 15 month shoot, and his intentions exceeded his and everyone's expectations. Sure, a ton of deviation from JRR Tolkien's beloved books was implemented throughout the movies, but the way that it was reflected onto screen was beyond brilliant and greatly complemented the masterful work of Tolkien. Letâs get started with the first film of the three!

I adore the heck out of this movie, but there is …

I Feel Little Fellowship with these Characters

The extravagance and scope of Middle-earth, the fantastical realm first conceived by J. R.R. Tolkien in the 30's and finally realised on the big screen by Peter Jackson at the dawn of a new millennium, has had a gargantuan impact on contemporary literature and film. Take any epic fantasy book series produced in the last half century, and doubtless you will find strong thematic and stylistic strands of linking DNA with Tolkien's books; likewise, if you took any epic fantasy film (or television show) from the last decade, you would find echoes of Jackson's panoramas of forests, wastelands, and dramatic battles.

All this cultural significance and visual splendour considered, the 'Lord of the Rings' trilogy (in particular this installment) can be a bit boring. The main problem I have with …

No posts have been made on this movie yet. Be the first to start talking about Lord of the Rings: The Fellowship of the Ring!