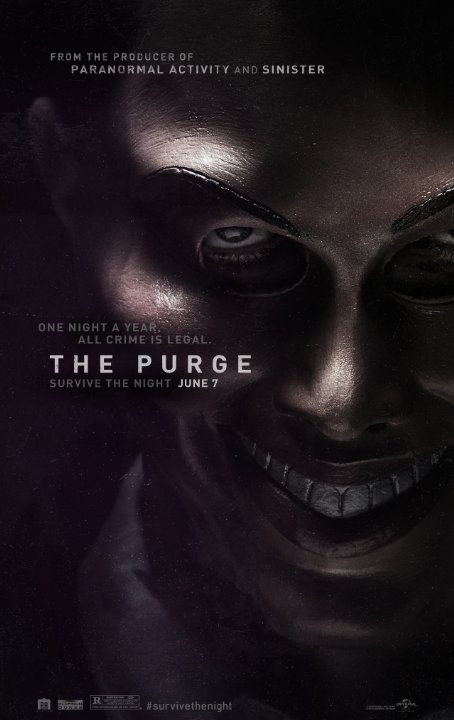 Plot: In order to combat the overcrowded prison systems, the government begins to implement 12-hour blocks where illegal activity is allowed. The film follows a family during one of these periods as they must protect themselves from a home invasion. -- Chris Kavan

Has a great central premise in this annual 'Purging' event. The intent is not fully realized due to the movie focusing on a routine home invasion plot with an unlikable family at the center. A few tense moments surface after the enemies finally breach the strong enforcements, but it doesn't last very long. The ending leaves us with some questionable character motivations that sends a mixed message regarding the film's political agenda.

A night were a stupid kid that almost got he's family killed. The film follows a family during one of these periods as they must protect themselves from a home invasion. This movie had a good story but this movie kind of suck. I mean the acting is good but they is a kid in the movie that is really stupid.

A few people recommended this to me and I thought it sounded really interesting. Now I know I should never listen to those people again. To me it was just a boring waste of time. Now I realize I shouldn't be writing a review because I didn't really pay enough attention to tell you anything about it. Except that it was incredibly boring and that there's nothing captivating about anything in it.

"The Purge" by Yojimbo

In a future society where crime is legalised for one night a year, a family is threatened by the ensuing violence when their fortress-like home is invaded by strangers out for blood. On the surface, The Purge seems very like a typical stalker-horror hybrid where an ordinary family is subjected to some rather graphic violence in a similar way to the likes of Funny Games and The Strangers. The story of this film does at least attempt a more sophisticated approach however, using the analogy of the legalisation of crime as a kind of logical conclusion to neoliberalism and its associated concept of "meritocracy"; it is inevitably the poor who are the subject of violence and murder as the rich either hunker down in their secure gated communities to watch on television or indulge in hunting the …

The concept is brilliant, the effect totally failed. I expected much more from this film, but against all odds, it was just a flabby fuss about nothing.You can hardly call it a thriller as I wasn't biting my nails because of any tense moments. It wasn't horror either, not even by a long shot. Someone putting on a clown mask doesn't make it necessarily a horror film. And beats me where the SF part is.

I can only agree that it's totally predictable . The moment the neighbours came over to bring the cookies and you saw the jealousy dripping from them, I knew enough.
I also don't think the idea of "The Purge" is really feasible. Any decent citizen would take the opportunity with both hands to deal with his annoying neighbor, boss or annoying cackling wife. I would try it anyway. A …

The Purge suffers from a serious case of âstupid-it is,â and an even worse case of ânot scary-it is,â but at least itâs entertaining.

If it wasnât for its ridiculous premise The Purge would be a dull as dirt slasher flick. The movie doesnât know what the heck itâs trying to do (for a movie thatâs apparently anti-violence, it sexualizes violence quite a lot) but I think that might actually be for the best. The utter ridiculousness of whatâs happening, and the way the movie seems to sleepwalk through its potentially clever premise is the only thing that makes this movie stand out.

Go see it if you like horror movies or are interested in the premise, otherwise youâll probably be okay to skip this one. Itâs not really bad, but itâs not particularly good …

This Thriller, (not a horror movie)I loved it.And nicely done, excellent plot, excellent actors.Personally, I found it very realistic, not so much for the &quot;want to help others,&quot; but for realism and cynicism of the neighbors.The hatred envy, accumulated during the year, caused by is protagonist, who do not realize that sometimes silence in silence and better.Realistic, wonderful,My vote: 10 +

Nothing like the hunger games. Not preachy at all. It's a great home invasion thriller with high tension and a few shocks along the way. It's quite intense the whole way through. There aren't any cliches that usually fall into the home invasion genre. I gave a it 3 but I'm thinking of giving it a 3.5 because it didn't waste its ingenious premise. And I don't doubt that someday something like 'the purge' will be a real reality for us. Great thriller, grisly, wonderfully acted (especially by the &hellip;

It seems comparison has been made about how R.I.PD. seems a lot like Men in Black and Ghostbusters. The trailer for The Purge seems a lot like The Hunger Games. I don't mind that new movies are similar to older ones. I am interested in The Purge, but it will be a rental for me.

I saw this trailer before Evil Dead the other day, and I thought it looked interesting. &amp;nbsp;it looks a little silly and preachy, but at least it looks unique. &amp;nbsp;any half-decent looking original movie is worth seeing in my book, especially in a world filled with super-heroes and remakes.

The concept seems completely ridiculous but the trailer did a good job of making it look interesting (though, isn't that the job of trailers?). I would say it's a rental for me. As long as Lena Headey goes all Cersei Lannister on someone, it will probably be worth at least that much.