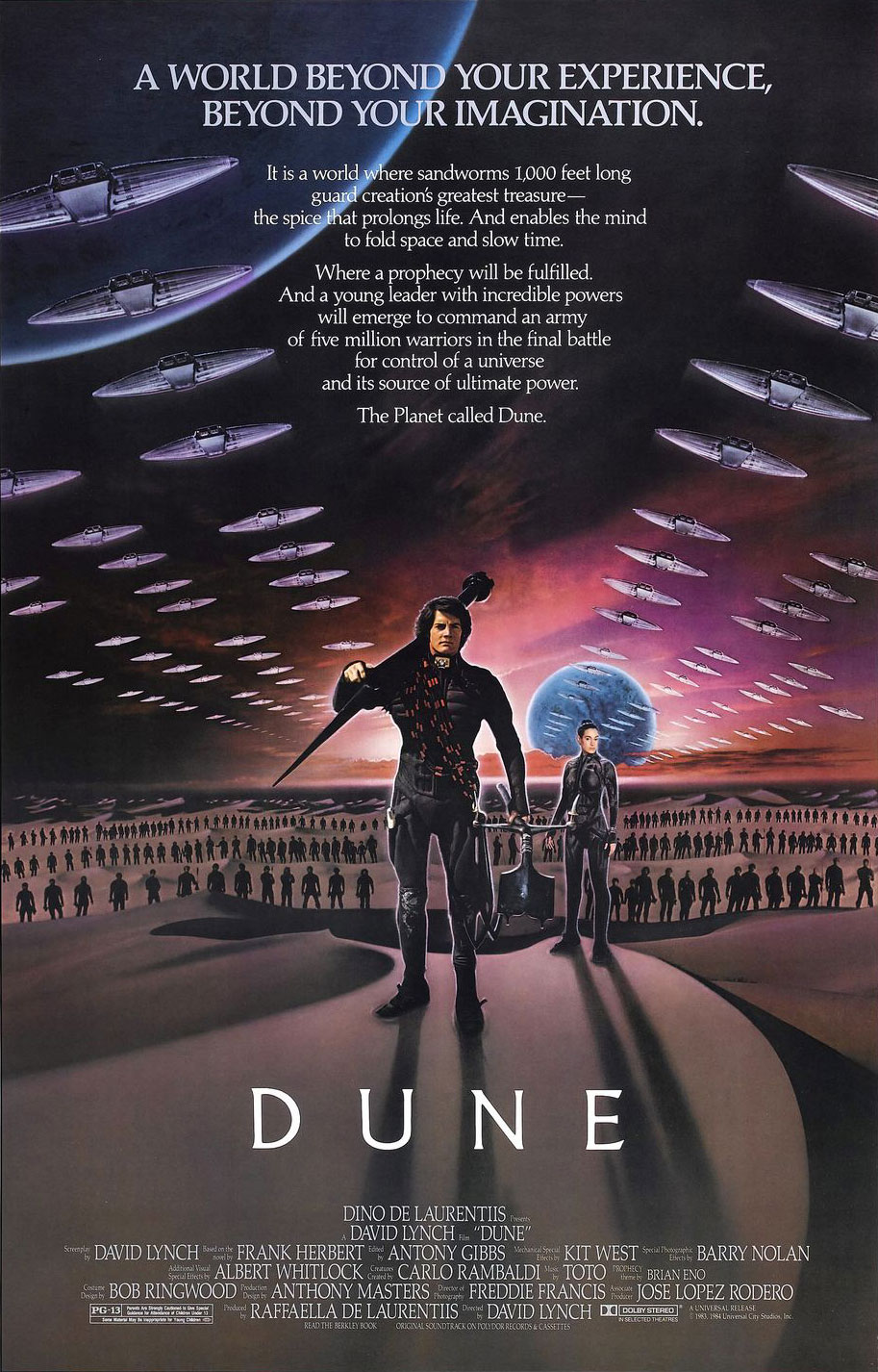 Plot: A galaxy whose important product is Spice is given a possible prophet to save the outlying planets from oppression and other political poverty.

Any potentially deep subject matter gets drowned out by its confusing, muddled, and overcrowded story. David Lynch's "Dune" is a beautiful mess that has gained a following that I unfortunately am not a part of.

Grotesque visual effects, too many characters, and a labyrinthine yet utterly incomprehensible story makes Dune one of the most unbearable big budget movies put to film. I doubt even fans of Frank Herbert know what the heck is going on with the plot. David Lynch's fetish for ugly visuals, drab set design, and a dark dank vision of a feudalistic future may set it apart from other space operas like Star Wars or Star Trek. But it's thoroughly unpleasant to watch and the furthest thing from entertaining. Even Caligula was at the least interesting and memorable to sit through as a movie viewing experience. This couldn't even top a Penthouse porn epic! I can't think of anything sadder!

A disastrously un-entertaining mess of a movie. After watching, it's easy to tell that 'Dune' was adapted from a hefty novel. But that shouldn't be an excuse for the film to turn out as colossally convoluted as it is. The visuals, as fantastically weird as they may be, don't make any more sense than the story and characters. The majority is unpleasant to look at, despite having mostly good SFX for the time. Nothing but a big boring head scratcher.

Spice, worm, water of life, and more surprises. A story about Duke Leto Atreides (Prochnow), maturation of Paul Atreides (MacLachlan) and an evil Baron Vladimir Harkonnen (McMillan). The extraordinary sets/locations, elegant score, deep metaphors and impressive costumes outweigh the bad editing and fair acting. Some nice lines: Paul - "I must not fear. Fear is the mind-killer. Fear is the little-death that brings total obliteration. I will face my fear." and " One cannot go against the word of God." It reminded this critic of a poor Star Wars version in terms of storytelling and pacing. No aliens here though, just powers and eclectic characters. Cut scenes were original but the editing suffered due to production problems, which really hampered the quality of the film. Dune may …

A strategically vital mining planet is the subject of a power struggle between duelling Houses that form part of a planet spanning empire in the far future. David Lynch's ambitious stab at bringing Frank Herbert's complex series of novels to the silver screen was something of a heroic failure. Vilified at the time because of its wordy script and erratic fidelity to the source material, Dune is nowhere near as bad as many make it out to be. It has much to commend it; it includes a believable sense of galactic empire, some nice costume design and (for the most part at least) a strong cast all presented with a really nice otherworldly, dreamlike atmosphere. Unfortunately its flaws include poor sets, very dated special effects and some unbelievably hammy performances from the villains of the …

No posts have been made on this movie yet. Be the first to start talking about Dune!