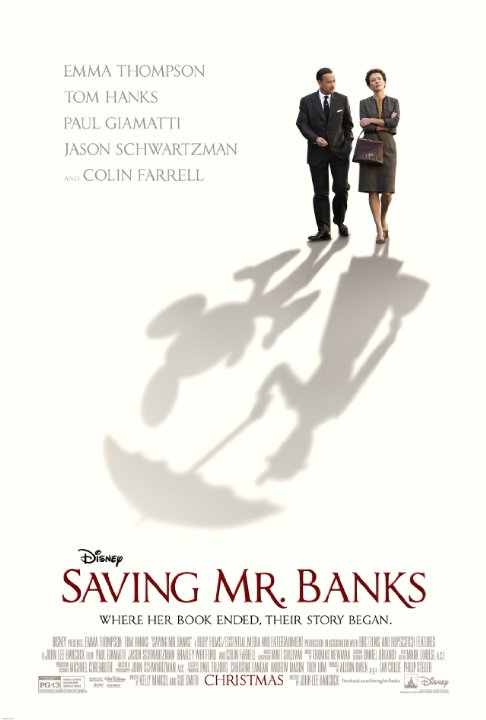 Plot: Author P.L. Travers leaves London for the bright lights of Hollywood as Walt Disney adapts her novel, Mary Poppins, to the big screen... despite her misgivings. -- Chris Kavan

The best thing about this movie, aside from the fact that it has a powerhouse cast (Colin Farrell is one of my favorites), is that we get to see a look of one of the major clamors in the film industry, which is adaptation of books.

So what if a few liberties were taken with the story (pretty much the fact on any "based on a true story" film - some more than others), this is a sweet and yet not too overly-sentimental look at how Mary Poppins (let's face it, still the best live-action Disney movie) came to be. Emma Thompson is wonderful as the quite uptight author P.L. Travers and Tom Hanks is likewise the perfect Walt Disney. I especially liked the trio of Jason Schwartzman, B.J. Novak and Bradley Whitford playing the songwriting Sherman brothers and the beleaguered script writer Don DaGradi. The music was great, the story (between flashbacks and current time) was well thought-out and planned and, in the end, it makes you smile and maybe brings a tear to your eye.

I went to see this movie expecting it to be a mostly hyped up too sappy Disney-fied money maker, but I was so surprised at how good it was. It was very adult and honest (especially when compared to other recent live action Disney flicks...) I actually cried more than once while watching it. Even if all of the events in the movie weren't exactly accurate, you could tell that the filmmakers were trying to do justice to P.L. Travers while also creating a compelling story.

A friend told me to rent Saving Mr. Banks before I bought it because it was an emotional film. She also told me not to let my second grade son see it. Her explanation was "While the film is about the makings of a well loved children's film, Saving Mr. Banks is too heavy for young viewers." I was confused. That is what made me fall in love with Mary Poppins, that she did not hide the bitterness of life, but encouraged the children to tackle it head on with a spoonful of sugar. So I bought the DVD and I have to concede that my friend is right. Saving Mr. Banks is a wonderful film, as one would expect from the talents of Tom Hanks and Emma Thompson. It is not a movie I would watch again and again.

The film weaves the childhood flashbacks of P.L. Travors and present day reality in a …

Emma Thompson turns in an award winning performance as P.L. Travers, author of the children stories featuring Mary Poppins. Tom Hanks does a well studied turn of Mr. Walt Disney, which is to stay he isn't overbearing in this role. Which is good, because the clear focus of the story is on Mrs. Travers, and her struggles. Although the movie is well directed, and for the most part the characters are true to their roles, there's an underlying current of mystery regarding Mrs. Travers that unfolds throughout the film. It may be difficult for someone from a younger generation today to understand her motivations and actions, but the director pulls you along on the journey slowly and evenly. I'd recommend this movie to any fan of Disney behind the scenes stuff, even if some of it is clearly …

Creative Stuggles With The Mouse

'Saving Mr. Banks' is a unique Disney film, in that it doesn't completely feel like a typical Disney drama. That makes it more interesting since the story involves real-life Disney filmmakers, including the man himself, in the beginning creative process of making an eventual Disney classic film. Despite that fact, this story is almost entirely about P.L. Travers. Emma Thompson is absolutely fantastic in this role. Much is learned about this woman through her dealings with Disney and the second tier story of her childhood that coincides. I particularly liked the latter part, because those scenes of her past explained so much without too much dialogue. It felt like it's own mini movie-within-the-movie. All of the sentiment was well earned and it complimented the main story very …

If you are planning on seeing this movie I highly recommend watching The Sherman Brothers first. It is a great documentary and the the Sherman brothers will play a role in this movie.