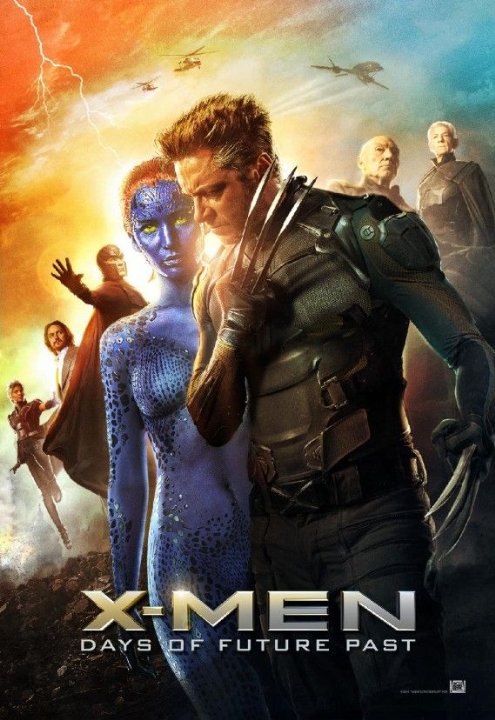 Plot: In a dystopian future, Wolverine is sent back in time to the early 1970s in order to change events that have had such a devastating impact on mutant and mankind alike. -- Chris Kavan

Pulling together an intricate time travel heist and its heroes' struggles with their mutant identities, "Days of Future Past" is the "X-Men" franchise's most ambition entry and almost one of its best.

Ideally, future installments of movies should set higher standard for the following movies. In this case of X-Men: Days of the Future Past, I think that it failed the said principle. X-Men: First Class was directed by Matthew Vaughn, one of my favorite directors, who did well on the said prequel. On this new franchise, although there is an interesting plot and good set of actors, I failed to see the x-factor in x-men movies. Not bad though, I will still give it 3-star rating!

A young Nightcrawler is the epitome of scene stealers. He was cool in the 2nd X-Men flick but here he was just awesome. Focuses on Wolverine though and hs heroics/sacrifices. You get to see a young Colossus, Magneto, Prof. X, etc. The storyline fast was fast and the action just spectacular. Just plain fun and provocative from start to finish. At least they did right this time around.

"X-Men: Days Of Future Past" by Yojimbo

In a desolate future where mutants have been hunted to extinction by militarised robots, Wolverine's consciousness is sent back in time to prevent an assassination that set the course of history on this path. Based on one of the all-time classic comic book stories, DOFP was probably the most anticipated of the X-Men films and obviously had a lot to live up to amongst fans. As a fan myself, his makes it rather difficult to view objectively, but I have to say that the result is nothing like as bad as the sorry bastardisation of X-lore that was The Last Stand. Certain tinkering was inevitable to translate the story to mainstream audiences and the use of Wolverine as the main protagonist works reasonable well, as does the reintroduction of the uneasy alliance between Charles and Magneto. The …

The x men go back in time in this part of the franchise.
The story is very simple they have to back in time to stop a inventor getting killed which leads to their future deaths in order to prevent this happeneing they must stop one of their own from killing him. so they send wolverine back to meet their younger selves and do the job.
This movie is more about the james mcavoy and micheal fassbender and wolverine than the other x men.
i would of liked to of seen the others featured more.
as a movie i liked the last one better , this one i found to be just ok. it was just too basic of a story and too predictable., theres some good scenes esepcially the rescue scene with the fast power guy. but i was bored with the fassbender v mcvoy again sillyness and the ending i found quite lame …

Another good but not great entry into franchise

With much anticipation as it alongside "The Amazing Spiderman 2" were the only 2 movies I wanted to see this year(2014) I finally got to see "D.O.F.P" and I will say it was good however I prefer it's predecessor "First Class" more. Back are the cast alongside their older selves this time to fight side by side against an enemy named Trask (Game Of Thrones star Peter Dinklage) who has scientifically designed robots who have the power to sniff out mutants scattered throughout the human race and then destroy them. During the future Trask's mutant killers are the real deal and have been attacking Xavier's(Patrick Stewart) mutant school. Xavier along with Eric aka Magneto (through me for a loop as well) who are now working together??? send Wolverine(Hugh Jackman) back through time to '73 …

No posts have been made on this movie yet. Be the first to start talking about X-Men: Days of Future Past!