This is the End Movie Information 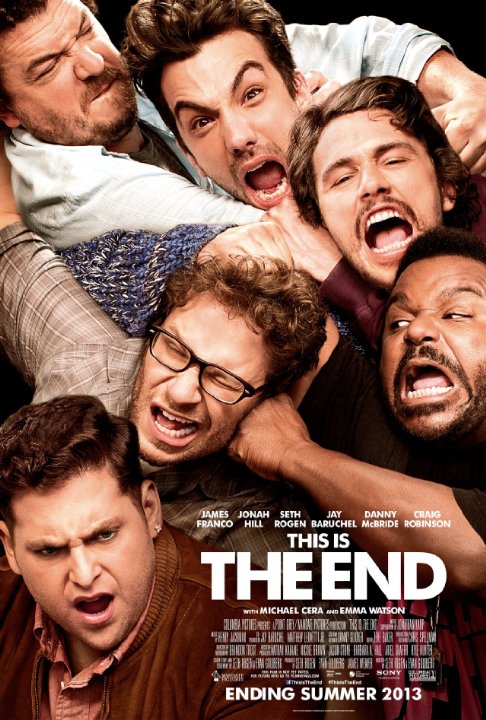 Plot: While attending a party at James Franco's house, a group of celebrities (including Jonah Hill, Seth Rogen, Jay Baruchel and Danny McBride amongst others) must cope with an impending apocalypse. -- Chris Kavan

A funny comedy that makes the most of its disastrous situation, and is full of as much personality as its real life characters.

A movie that makes fun of itself. I mean the comedy is outstanding and it's just a really good movie to watch.

This is essentially an ad-libbed film with a bunch of buddies set in James Franco's house during the Apocalypse. Great cameo turns from Michael Cera and Emma Watson (along with a host of other stars - many of whom die horribly). It's stupid, but in a good way - but you have to be a fan of Rogen, Hill and co. to really get the most enjoyment out of this.

A surprisingly good film, that uses real life friendships to lift this movie up to "good" status. I think one of the best things that they did was use their real names in this film. It gave the film a small base in reality. One that featured demons and Satan himself walking the Earth, but some reality. The film reminded me a little-bit of Night of the Living Dead. A group of people are trapped in a house while the world ends around them, and the demons are closing in to seal their doom.

BTW, the small cameo the Michael Cera has is hilarious. He plays the exact opposite of what we think he's like in real life, (then again, maybe what we see on screen in this film is actually him, and what we "think" is reality is him acting).

If you're a fan of Apatow (who had nothing to do …

This is the End review

It may not have the respect of critics or even the Academy Awards, film enthusiasts/comedy fans will treat it as gold. Definitely underrated and pure entertainment. This picture is the complete package: a horror, documentary, fantasy, dark comedy with a touch of musical at the end. Everything in this film was just funny, engaging and provocative at the same time. Screenplay, soundtrack, special effects and artists were just brilliant. So many truckloads of quotable smart quotes: "We can get thru thisâ¦we can do this together." "There is still hope." "His reckless behavior is bringing us down." "You should not be dishonest with your friends." "F^c&king civilizationsâ broken downâ¦you guys so high and mighty you never made a mistake beforeâ "There's a reason we're all here." "It …

Seth Rogen is a funny guy. And here, along with Evan Goldberg, he crafted not only a funny movie, but a visually legitimate movie.
This is the End is the funniest movie I've seen in a long time. Seth Rogen created something he knew the people would like, because this movie has it all. ALL.
The idea itself is just so funny. Actors playing fictional versions of themselves, including James Franco, Seth Rogen, Jay Baruchel, Seth Rogen, Craig Robinson, Danny McBride, Jonah Hill and many more (WOW! What a cast!).
I loved the way the movie just made fun of itself. They make fun of James Franco because he was Oscar-nominated, so suddenly he's classy and collects art. Jonah Hill is the exact counterpart of his movie roles, he's the sweetest guy you'll ever meet. Danny McBride isâ¦ still Danny …

worst film of 2013 , bad acting. unfunny silly and stupid and thats being kind. it made the worlds end look good n that sucked as well&amp;nbsp; lol

Just read your review - I can't wait to see it this weekend! Comedy has been lacking a bit this year - I read the Rolling Stone interview with Franco, Rogen, McBride and Hill and I'm really pumped up about it now.

Critics are loving it! I'll be seeing it tonight.

There are two apocalyptic comedies coming out this year I have been anticipating - and This is the End hits first. It looks hilarious yet completely over-the-top ridiculous at the same time. Actors playing &quot;themselves&quot; is a risk - but from what I hear, it's pretty much completely tongue-in-cheek with a lot of improv thrown in. It could be a disaster, but even if it's a train-wreck of a film - at least it will be an entertaining one.