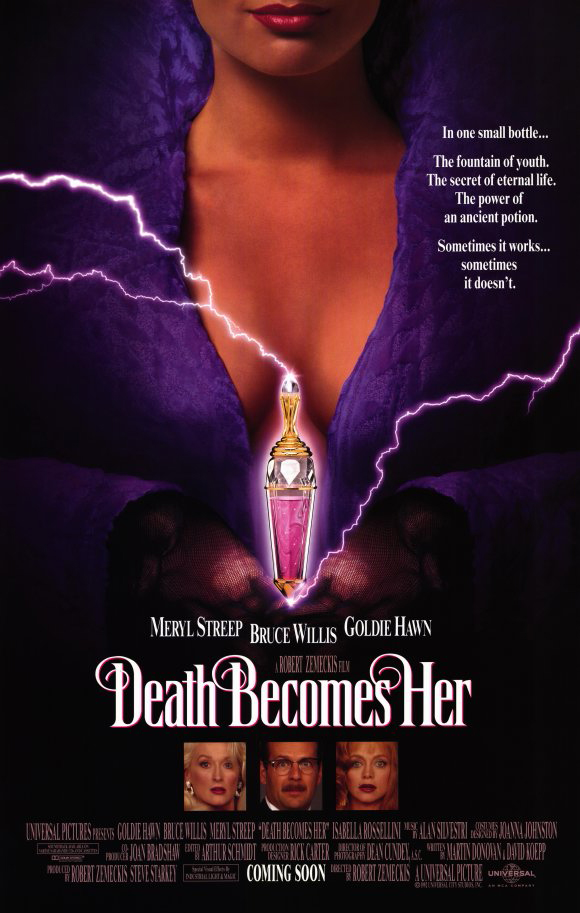 Plot: Helen has been plotting her revenge for years after Madeline stole Ernest from her. Their bitter rivalry extends beyond death, however, when each drinks a secret elixir meant to bestow eternal youth, but at a disturbing price. -- Chris Kavan

I don't really remember much about this movie other than it being a cute, odd little movie.

I enjoyed this dark comedy. Streep, Hawn and Willis were all funny. I liked the special effects, especially when Streep and Hawn are years older and falling apart.

A morality tale based on a very human foible - in this case the fear of growing old and the search for perpetual youth, or at least a youthful appearance. Meryl Streep and Goldie Hawn play aging childhood friends who grow to absolutely hate each other. Helen, (Goldie Hawn), hates Madeline, (Meryl Streep), because she always steals her boyfriends. Helen is currently in love with Dr Ernest Menville, played by Bruce Willis, but Madeline steals him as well and they get married. Years later, both go to a beautiful witch who has a youth potion that allows them to be immortal and gorgeous forever, but they get more than they bargained for when they both die but stay alive (due to the potion).Now they must rely on Ernest to save their skin from rotting.

Meryl Streep and Goldie Hawn are …

My Robert Zemeckis Films Rankings by The WHB

No posts have been made on this movie yet. Be the first to start talking about Death Becomes Her!