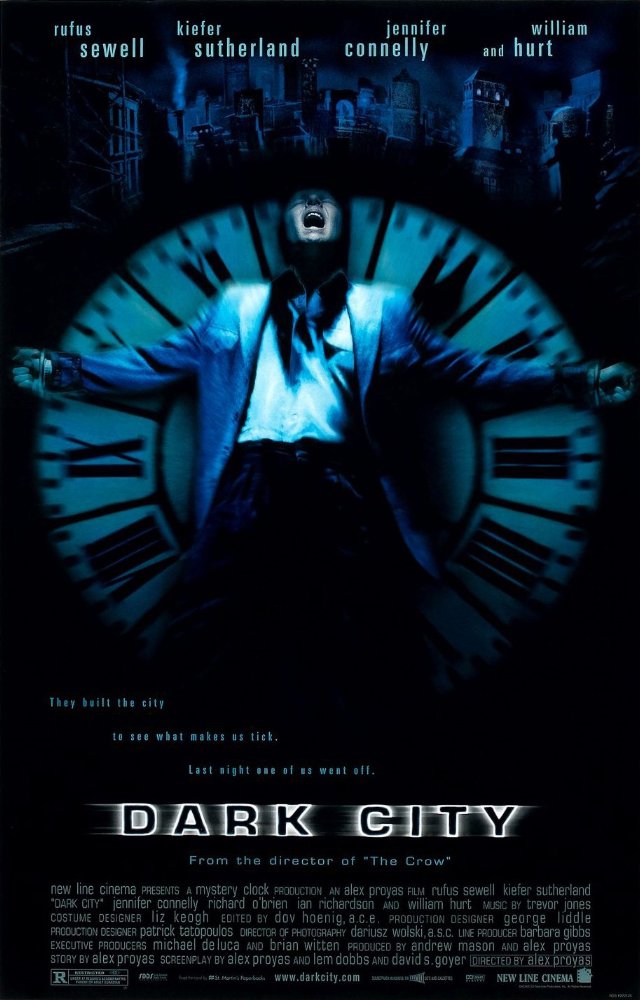 Plot: The city is not what it seems. Has anyone seen daylight? How do you get to Mertle beach? Does anyone have the answers?

Great script, terrible casting of everyone except the Strangers. Whatever you do, don't watch the theatrical. The editing is so much worse and they spoil the whole film in the first five minutes.

An underrated supernatural thriller with a noir touch, "Dark City" plays with your mind as much as the bizarre Strangers play with the characters' memories, as well as the world around them.

One of most interesting sf and mystery film ever

Dark City has the dubious honour of being known as "the film that's not as good as The Matrix." Released a year earlier and featuring some very similar ideas, it is the story of an amnesiac, stalked by mysterious black clad strangers who can alter reality through a city that's shrouded in perpetual darkness. In fact the whole concept of the hero with no memory, hunting for clues through darkened streets reminded me a lot more of a videogame plot, and to be honest, it felt as underdeveloped and episodic as one too. The performances did not help either; Rufus Sewell's hero is about as memorable and charismatic as a dead TV channel, Jennifer Connelly acts like a prom queen in a high school play and Kiefer Sutherland (at his least bankable, when everyone was sick of the bratpack and the 24 …

John Murdoch (Sewell) is being hunted by the Strangers. Dr. Daniel Schreber (Sutherland) was able to explain the reasons behind the city, Strangers and the reason for people to forget their memories. Emma (Connelly) is baffled about his husbandâs reactions. Inspector Frank Bumstead (William Hurt) aids John to solve the mystery of the murders and forgetfulness of humanâs. Anna invites John in the end to go to Shell Beach. The acting and soundtrack was decent, the thing that stood out was the screenplay and visual effects. Pace of the story was way better than Blade Runner. Some memorable dialogue: John Murdoch â â..everything you remember, and everything Iâm supposed to remember never really happened. Someone just wants us to think it did.â Dr. Daniel Schreber â …

No posts have been made on this movie yet. Be the first to start talking about Dark City!