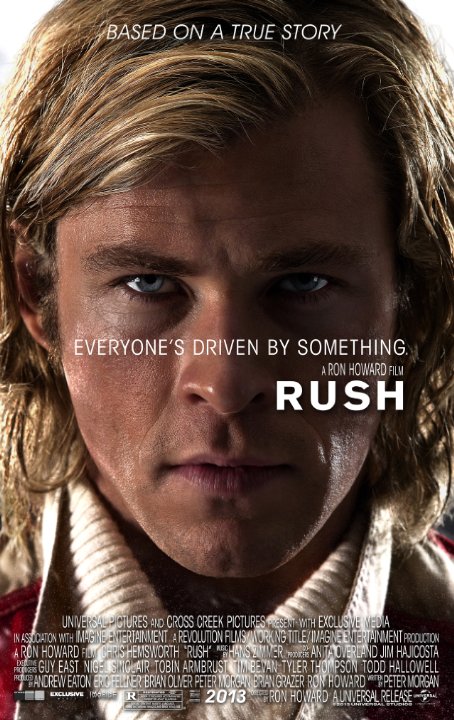 Plot: The story of Formula 1 driver Niki Lauda who, throughout the 1970s, shared a rivalry with English playboy James Hunt. On and off the track, the two shared a much different approach to racing and life but nothing topped the 1976 in which Lauda was involved in crash that nearly claimed his life, but weeks later, challenged Hunt once again. -- Chris Kavan

This movie has good acting and it many not be my favorite movie of the year but I still enjoyed this movie and sometimes Ron Howard shows how good he's talent at film making.

This film is embarrassing ... Actors bad, ridiculous screenplay, directed nowhere to be found .... disappointed, I was expecting quite a biographical film, a film that explored the dramas and the virtues of the men on the inside of the sport. my Rating 0

Before Senna and Piquet, the great Formula One rivalry was between Brit James Hunt and Austrian Niki Lauda and the difference in attitude could not have been more stark. Hunt was a charming, glamorous, daredevil playboy while Lauda was the ultimate professional, dedicated to the point of obsession. This makes for a brilliant clash of personalities on and off track that makes for a hugely entertaining high octane soap opera punctuated by some suitably thrilling race sequences. The sense of period is also excellent, shot as it is in the high contrast colours that characterised the decade and featuring the classic car designs that lent so much character to the sport at the time. There is more humour, drama and tragedy than it would be fair to expect from a true life story and Hemsworth is …

A Formula for Speed

'Rush' is a terrifically directed and well acted dramatic biographical film. Director Howard creates a sense of danger in each high-speed race, by way of creative camera placement and editing, that puts the audience in the driver's perspective. Most will find it hard to not tense up at certain moments. The film does sustain it's momentum between races as well. Much information is related about the sport of formula one. But the meat of the story belongs with the famous rivalry. All of the actors are believable, with the standout being Bruhl. His performance seemed the most immersive to me. The narrative contains my only real problem with the film. Besides the predictable nature of the genre being present, there were too many moments in which it felt the film was reminding me of …

A Movie That Lives Up to Its Title

It takes a certain kind of man to drive what amounts to a mobile bomb - one that guarantees a 20% of death in every race. That was the odds facing every Formula One driver in the 1970s - and two such drivers, the hot-headed, loose cannon playboy James Hunt and the efficient, by-the-books serious Austrian Niki Lauda developed one of the greatest rivalries in this or any sport.

Both men couldn't be more different in personalities - but both came from a much similar place. Hunt's family is into business: investing, accounting and the like, but he isn't interested in that life - he prefers the rush of speed (and women) that Formula One racing brings. Likewise, Lauda's family is wealthy thanks to banking and even though his father disapproves, he takes out his own loan in order to follow …

No posts have been made on this movie yet. Be the first to start talking about Rush!