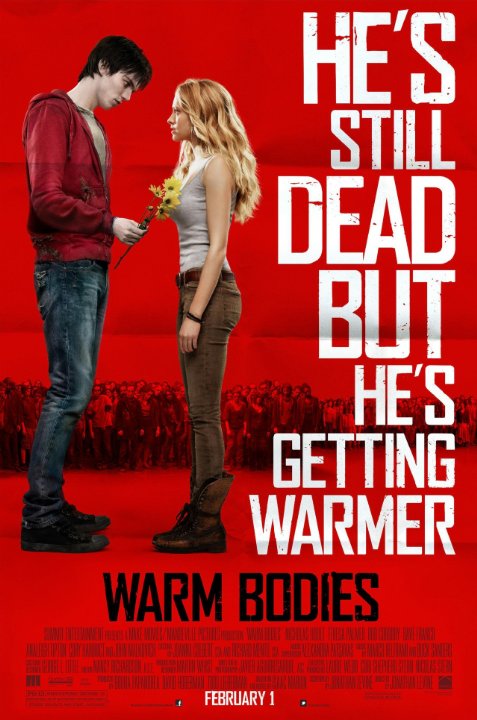 Plot: After a zombie eats a man in post apocalyptic times, he absorbs his memories and falls in love with the victim's unzombie girlfriend.

Capitalizing on the YA, zombie, and post-apocalyptic society crazes, "Warm Bodies" is an original movie that combines "Dawn of the Dead" with a Shakespearean, Romeo and Juliet love tale. Despite its quite literally 'dead' subject matter, it's surprisingly lively, funny, and genuinely emotional.

Better love then twilight. Okay everyone is saying that this is like twilight but I think that's unfair, I mean warm bodies is better then twilight.

It's creepy imagining zombies asorbing our memories by eating our brains & zombies falling in love with humans.It is interesting watching the relationship between R & Julie though.Warm Bodies is an OK zombie movie with a definite twist & something different that I would tell somebody to go check out but it's not something that I'd watch again.You'd think a movie like this would be better than what it was but like I said for me it was just OK

Almost a good one.

"R" is a zombie, who struggles to be human. After eating a man's brain, he is close to being mortal again.

***
The story, over-all, is not THAT BAD. However, it should have been presented in a more mysterious way. At the back of my mind, the story should go backwards, with that, the film could have been more interesting. I think, the cast adapted the "twilight" acting. I cannot commend their performances, the acting was too effortless, maybe they thought it would still be entertaining just because it is a zombie movie, a teen-flick sci-fi or whatever you call it so they never really paid attention on the acting executions.
The movie could have been so much better, if only they use different perspective. For me, it would be better if it used the girl's perspective. The mystery, the …

It is too hard to give a zombie film a passing grade. But looks like, this mentality is to be thrown away, because warm bodies is a warmer and easily a passing film of such genre. The motto of the film is straight. The zombies are the good who are changing with time. The Bonies are the scrap creatures who show some rough stuff. Nicholas Hoult known as Mr. R is understanding the real change in zombies. The rare example is where, a zombie helps a US swat force to kill the Bonies. Mind blowing and really that was set back example where, this film has gone a step ahead. Teresa Palmer is caught by Nicholas. They slowly understand each other and develop a decent relationship. Director Jonathan has put the right stuff without giving too much into the plot. Who are the bonies? Well, I did not …

"He's bleeding...he's alive." Perry is killed by R, a zombie. Uncharacteristically, he saves Julie and tries to get to know her. M, R's best friend, becomes suspicious. The soundtrack, as good as it may seem, doesn't match certain scenes. The story's pace is slow and moves based only on memories. It was weird seeing R run when admittedly he moves slowly. Nicholas Hoult's portrayal makes the film watchable because of its believability and delightful his role. The screenplay was surprisingly provocative: "To feel better, a little less dead." "I wish I could dream." "Must be hard..I see you trying hard." "I should be happy with wht I have." "You can be whatever you want." So many positivity and minute cheesy lines, transformation of a corpse to being human again with no …

I love how we have different opinions about zombies and talk about the variations of zombies: fast, slow, lovable, uncaring, undead, able to revert back to prezombie human. I love all the new movies that open up this discussion! I'm not usually the fan of this kind of cinema, but Zombieland, Warm Bodies, and World War Z have all been very different from each other, but still very entertaining for me.

I agree zombies don't actually exist, but if they did, I don't think getting close to them would be a good idea... just like really drunk people and creepy neighbors alike.

The zombies do exist!You do not know my neighbor LoL

quote agree you cannot hug a zombie back to life. but I have to say I still
liked the movie despite the dangerous advice it gives about zombies.LOL funnyzombies are not real though friday night seeing the pubs empty you might disagree lol