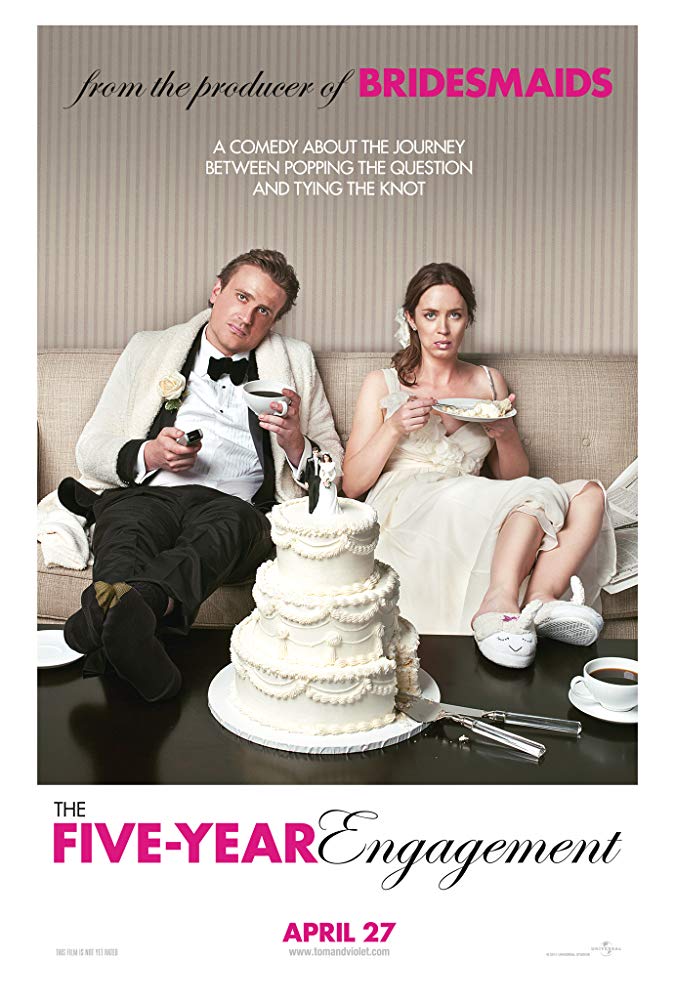 Plot: Follows the relationship of a couple during the turbulent engagement period. -- Chris Kavan

A depressing and frustrating movie. It has the same elements of 'The Break-Up' where I begin to hate the female lead. This one really makes me want to toss her off a bridge. Both performers are good in their roles and lead believable characters. --Spoiler-- The movie lost me when they end up together. I absolutely could not handle the movie after that. They should have gone the alternate route and have the romance go opposite ways. But to each his own.

Not a bad movie. A bit better than average. I like Jason Segel more and more, but not Emily Blunt. A decent R rated romcom in which I actually laughed a few times out loud. Don't expect much, but worth a rent on Date Night.

This movie certainly doesn't disappoint! I mean, it's everything that you're expecting it to be. And, it has everything you could possibly want in a romantic comedy. Plus, it frankly doesn't hurt that Emily Blunt is one of the most beautiful women I've ever seen in the movies. Both of them (and their friends and family) provide the laughs, and their love is more real than most on-screen romances.

Tom and Violet are already engaged after a year knowing each other. As out-of-marriage opportunities continuously come to their life during their engagement period, they choose to postpone the wedding.

***
This is a sweet comedy-drama, with a decent story to follow. There are some unnecessary scenes and I think neither Emily Blunt nor Jason Segel stood out here. Not to mention that it is not THAT funny as I expected it to be, most of the laughter came from the supporting casts. Although, I like the the "elmo and cookie monster" scene, funny and at the same time, it makes sense.
The story (which I cannot relate to) has this sweetness at the surface. I only feel something somewhere in the middle of the movie. A lot of things are happening but it seemed to not really contribute to the …

The first 11 minutes just spells disaster. Just too many idiotic figures displayed. Tom Solomon (Jason Segel) is a chef who proposes to Violet Barnes (Emily Blunt). Alex Eilhauer (Chris Pratt) is probably the most annoying with so many lousy lines.The couple plan a wedding. "Are you pregnant?" Answer: "Just a little." Just one of several moronic dialogues through-out the picture. You have Alex swearing with a kid on the table, Tom not looking after the kid, Vaneetha and Ming toast, the moments of stupidity just ensues. Blunt was unimpressive and Segel just unfunny (effective on TV but just not onscreen in this rater's opinion). The Five-Year Engagement's humor was just not appealing for this reviewer. Lengthy, dull and plain uninteresting. Forgettable and ludicrous all the …

Jason Segel and Emily Blunt play Tom and Violet, who met at a New Year's Eve party and got engaged exactly one year later. Tom is a talented sous-chef about to be promoted to the enviable position of top chef at a trendy San Francisco restaurant, while Violet is a psychology graduate student hoping to win a postdoctoral fellowship at Berkeley. Berkeley turns Violet down, but she eventually wins a fellowship in a two-year program at Michigan.

Tom willingly gives up his much-sought-after job and moves cross-country with Violet but the delay of their wedding and the growing friendship between Violet and her handsome and suspiciously charming Professor does not bode well for this couple as Tom struggles to fit into his new surroundings, eventually landing a lowly job at a sandwich shop. …

No posts have been made on this movie yet. Be the first to start talking about The Five-Year Engagement!