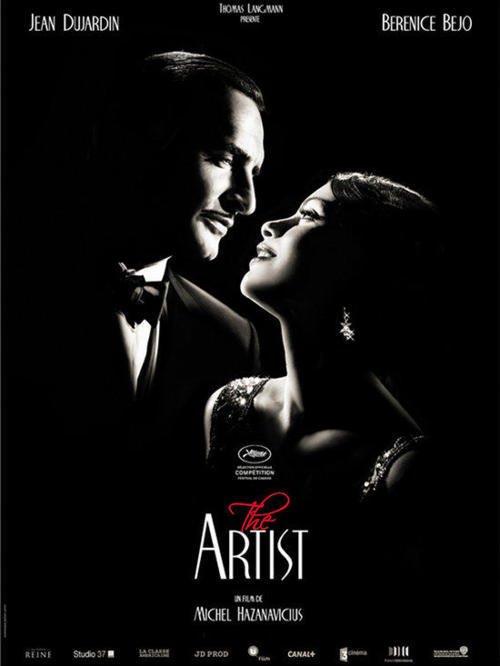 Plot: A silent film star who worries that the advent of talking pictures will spell the end of his career connects with a young up-and-coming dancer in 1927 Hollywood. -- Chris Kavan

I can't think of anything more courageous than to make a silent movie in the 21st century. "The Artist" is an excellent period drama and love-letter to cinema's silent era.

Silent but deadly that's what this film is like. I enjoyed this silent film and I like how it got best picture at the Oscar's good.

Wonderful! The reason this film was my favorite of 2011 is because not only is it a brilliant tribute to classic silent cinema, but it's also fully aware that it's a modern film. For example, there's a dream sequence that creatively incorporates sound in a manner that fits into the conflict of the story. Also, the ending was so brilliant; many people don't like that the film did what it did at the end, but I thought it was absolutely necessary. Dujardin and Bejo are great, the music is great, the dancing is great, the story is great. Call it "Oscar bait" all you want, but all-in-all, THE ARTIST is just a wonderful film that completely deserved Best Picture in my opinion.

The Academy Has Spoken

George Valentin is a silent film actor who refuses to "talk" in the movies. As he meets Peppy Miller, a dancer, a great shift on his career comes his way.

***
The reason why it won the OSCAR Best Picture is that this film stood out among the the rest of the nominated films that year. It's uniqueness (which is not actually new) made the jury voted in favor of this silent film. Even it used an old cinematic technique, it was able to give equivalent entertainment as to the modern action/scifi/animation films today. However, I got confused whether the "silent film" meant muting the voices, or relying totally on the movements of the actors?
Story wise, it was decent. The story is clear even with the absence of dialogues. The actors are very good! Jean Dujardin deserved his awards here, …

The Artist. What do we know about it?
It gave international attention and acclaim to Jean Dujardin and Michel Hazanavicius, it swept the Academy Awards last year and it pissed off raging nerds everywhere, who complained it's just so beloved because it's in black-and-white and silent. It's more than that.

The definite strong point in the film is the acting. My word, two people I have never even heard of gave such praiseworthy performances, delving deep into the psyches of two troubled characters.
I am also very fond of the journey these two are on. I say 'journey', because that is the distinguishing difference between a silent film from the 20's and a silent film from 2011, because the script is better, therefore the character arches are better. It of course takes some liberties in …

Charming with an Old School Twist

When it comes down to it, the Academy Awards aren't always exactly fair. Especially when it comes to Best Picture. Both The Artist and Hugo were nominated for best picture, and both were a love letter to cinema. From there, it should've been obvious one of these two films would win; it just came down to choosing the better picture. And while I personally believe Hugo deserved the honors, The Artist was more than a worthy rival, and was full of charm and spunk.

It's 1927, and George Valentin is on top of the world. He's starring in film after film after film. He was an idol. But things change, and change is precisely what stops George Valentin's career. After pushing a former nobody named Peppy Miller into the acting world, things regarding films begin to change. Silent films are no …

It's a movie about Hollywood and it's in black &amp;amp; white - no wonder it's getting raves! Critically, this looks to be one of the front-runners come Oscar night - personally, it doesn't look to be up my alley.

This sounds pretty good. I really enjoy movies about Hollywood when they are done well. It looks a bit low budget, but I can't tell why. It's fiction right?