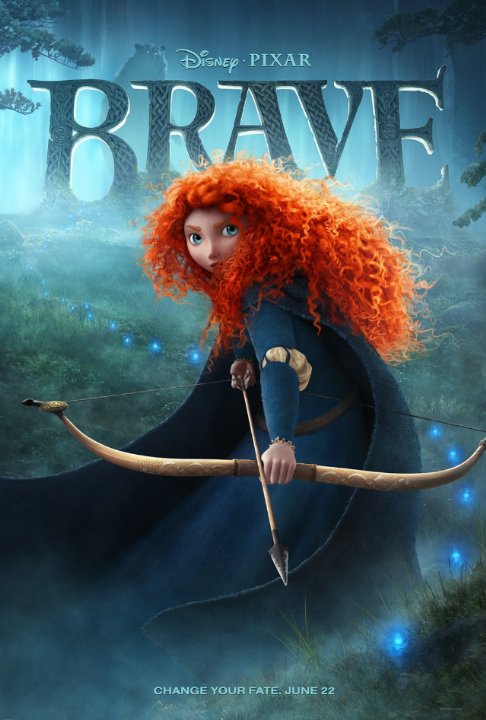 Plot: A young princess makes a reckless choice that has grave consequences for her kingdom unless she can summon the courage to face the curse head on in this mythological Scottish tale. -- Chris Kavan

"Brave" gets by on its conventional story that fits in with the more traditional Disney films.

Is it just me or the title of this movie is called brave just like brave heart. Okay I was not looking forward to this movie just because the trailer's don't look good but did the movie suck well I can say no. this movie had some of the best animated effect's of 2012.

I didn't know that this is a mother-daughter story. the story is a so-so and the whole production seemed to felt short. Not a bad one, but it could have been better.

Rule of thumb: A bad Pixar film is always better than a bad film produced by any other studio. This just happens to be a average-at-best Pixar film. It's really a simple tale on the surface about a girl who doesn't want to be forced into a marriage. I found the story to be just a little thin. I know it's an animated film, therefore, it's aimed towards children, but Pixar is usually good for some adult moments, I didn't really see any here. That's all I'll say about the story, let's talk about the visual.

They're amazing! It's definitely one of the best looking films I've ever seen. It seems like the main talking point about this film is the red hair. And it should be, for animated hair, there has been nothing better. I think the film could have been better visually if the …

This to me was like reviewing Brother Bear once again except this time it's the main charector's mother who turns into one, a bear that is. Aside from that this film did little and nothing for me but then again i'm not the target audience here, now the target audience (my kids) they both loved it so that's a good thing. Although being no fan myself of this family genre of films, only a few seem to capture my interest, I still look for great storytelling and found the storyline in this flick completly dull although i do have to say anything Scottish always keeps me somewhat entertained. I will say if you have a family and are looking for a movie night movie to watch then select this one however if you are a dad much like myself, who watches these films strictly for the kids only hoping …

BRAVE centers around Princess Merida, a Scottish princess who is wrestling against her impending fate to be married to one of her dad's allied clans as hard as she is struggling to win the approval of her mother Elinor. Meridaâs tomboy ways displease the Queen who would very much like her daughter to be a more ladylike Princess and this has caused conflict between the two for many years.

One day, after a particularly nasty fight with her mother, Merida stumbles upon a witches hut in the woods. Together they strike a deal to make a spell for Merida to change her mother and, ultimately, her fate, and well, things get a wee bit complicated as Merida accidentally brings a beastly curse upon her family that puts her love for her mother to the ultimate test.

My five year old son, who hates movie theaters and will wait patiently for the DVD, announced yesterday that he really wanted to see Brave in the theater. He loved it!&amp;nbsp; He is already asking if he can see it again. I imagine our household of seven will help boost the intake numbers for the opening weekend. Brave managed to convince me to not hold a grudge against Pixar for their Cars 2 disaster. For our family, Brave was entertaining for both kids and adults.

Despite garnering mixed reviews, it looks like Pixar will enjoy its 13th straight #1 opening at the box office. Although early predictions had it going for as low as $55 million, it's now looking like Brave should end up much higher at around $70 million (Madagascar 3 opened to $60.3 million). Those worried that Pixar was going to fall flat with a &quot;princess&quot; film - it's not going to happen.

Now that Madagascar 3 has taken the top spot two weeks in row - will Pixar be able to match that success with the first female-driven film in their history? A faction are grumbling this is too &quot;Disneyfied&quot; for Pixar by featuring yet another princess but I say that this looks like another hit - from what I've seen from the trailers both the characters and setting look amazing. I was disappointed the studio decided to go with Cars 2 instead of an original film last year and I'm hoping Brave can &hellip;