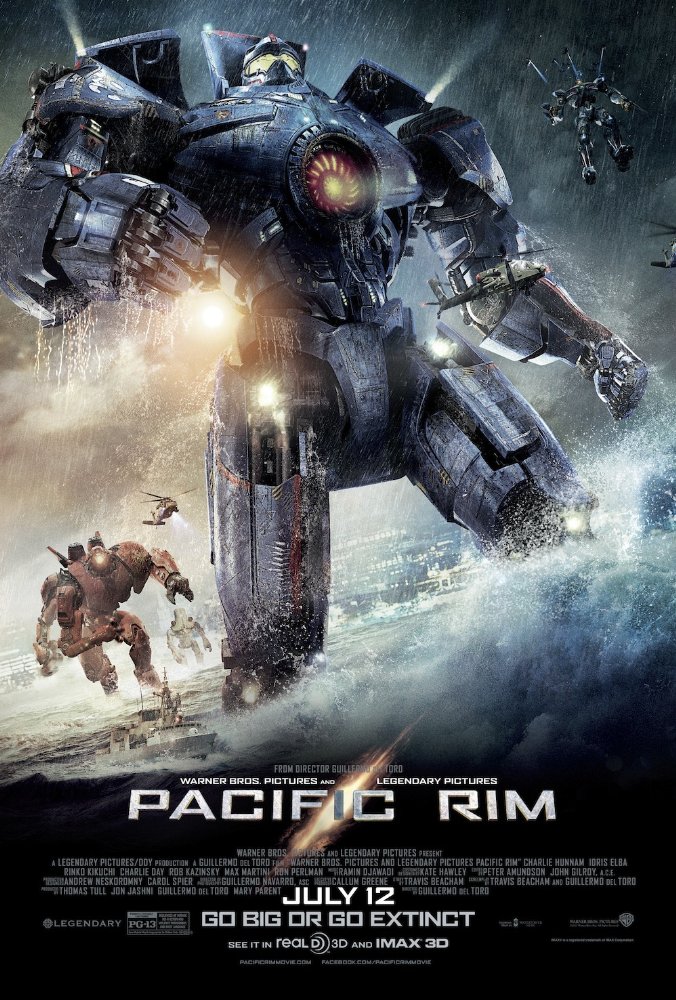 Plot: When monstrous creatures from the sea dubbed Kaiju attack, it pushes the human race to the edge of annihilation. Countering the force with massive robots known as Jaegers, two human pilots linked by a neural bridge take on the Kaiju. Yet even this force seems to be no match, and after years of fighting it comes down to a washed-up pilot, an untested rookie and an aged Jaeger to stand up for humanity. -- Chris Kavan

It's a typical blockbuster with characters that aren't much more than generic archetypes, but "Pacific Rim" is terrifically entertaining.

I loved every second of this movie. There is this sense of dynamic, explosive excitement to the fights and the build up, non unlike the 80's anime's it takes some of its theme from. Cities are laid waste like nothing that has been put to screen before. Each action scene is better than the last and the finale is epic beyond belief. There was a good dose of humor as well, which had me laughing out loud between moments of gasping with awe at the spectacle in front of me.

This movie has better action then transformers I just have to say that. When giant monstrous creatures from the sea dubbed Kaiju attack, it pushes the human race to the edge of annihilation. Countering the force with massive robots known as Jaegers, two human pilots linked by a neural bridge take on the Kaiju. Yet even this force seems to be no match, and after years of fighting it comes down to a washed-up pilot, an untested rookie and an aged Jaeger to stand up for humanity. This movie was pure epic, I mean the visual effect's are one of the best I ever seen and the action is awesome.

A race of hostile aliens are sending gigantic creatures through a dimensional rift to terrorise the people of Earth, prompting the world's military to create giant robotic fighting machines to combat the threat. The premise of Pacific Rim sounds like the usual Michael Bay style Hollywood drivel, but I have long been a fan of Guillermo Del Toro's work and so expected something altogether darker in tone and more intelligent than the usual fare. I was wrong. Quite why he got involved in this project I'm not sure, but this film ticks every one of the boxes of the bone-headed blockbuster and no more. True, Del Toro;s keen eye for visual splendour is evident during the spectacular CGI robot versus Godzilla style smackdowns, and during these sequences my inner small boy couldn't help being …

Starts of strong then somewhat fizzles in the overextended fight sequences and albeit cheesy ending. A film which mostly combines elements of Tron, Transformers, Cloverfield, Godzilla and a souped up Real Steel. The movies focuses on the skilled pilot Raleigh Becket, talented rookie Mako Mori, and the kindhearted leader in Stacker Pentecost:

It had sufficient character build-up/development, relentless action mixed with drama about the apocalypse/father and son/dealing with the past, believable special effects (IMAX 3D enhances it and the balls moving after a Jaeger crashes into the building thrown by a Jaeger was a nice touch), onscreen chemistry with Hunnam and Kikuchi, Elba was impressive) good comic timing in a dire situation and a pumped-up soundtrack. It's minor weak-point …

Great movie. I loved the unique spin Del Toro brought to it. Hope the sequel delivers

rocky had great dialogue it was character driven. to mention it alongside this film is a sin lolpacific rim was robots v aliens reminded me of cowboys v aliens , its entertainment but its silly.not a terrible film but not very good either, though i think kids would love iti especially liked the beach scene with the guy with the metal detector and suddenly is surprised by the big robot that comes crashing down in front of him. did he not hear that chunk of metal first lolsort of sums up the &hellip;

You guys are making me laugh. Did we see Battleship, Transformers, or hell...even ROCKY for the dialogue? No. We see movies like this for the action. Pacific Rim wasn't a trash movie. It had a decent storyline and plenty of what made us fill the seats in the theatre- giant robots fighting giant aliens. It was not Shakespeare, so quit expecting it to win Oscars.

One of my most anticipated movies of the year - I was a bit let down myself. Special effects were great - plot and character just not so much. I was expecting more.

It was hard, to finish the film ...I'm bored a lot ...The script was bad ...The special effects are not enough to save the movie ..