The Ides of March Movie Information 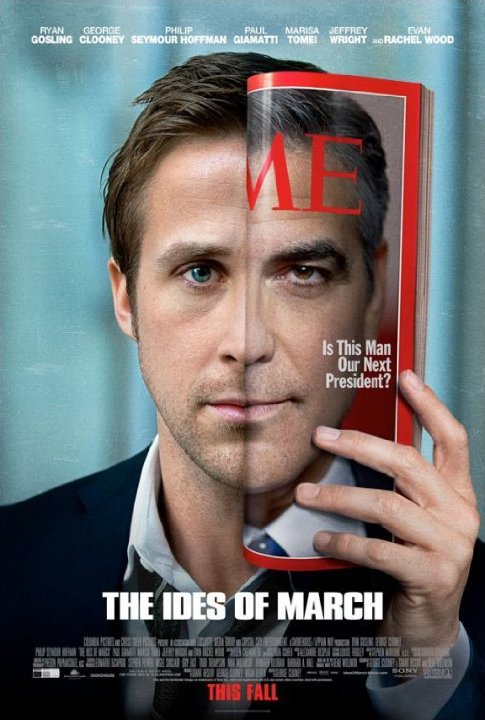 Plot: Based on Beau Willimon's play: A fresh-faced idealist learns how to play dirty when he starts on the campaign trail for a presidential candidate. -- Chris Kavan

As far as political dramas go, this is a good one. Gosling is a true star with a great performance. Cloony knows how to driect and control the camera. I think he needs to be a bit more darijg with his subject matter and we might finally see a best picture for him. Check it out if you have any interest in politics.

Although slightly cynical, this intriguing political drama deals assuredly with themes of corruption and optimism, framed by a fictional Presidential nomination race. All of the acting is superb, particularly by Ryan Gosling, whose character undergoes the biggest character arc. George Clooney doesn't have to work hard as the charismatic candidate in question, but, in the film's darker moments, he surprises by touching on some more menacing notes. The film's writing is the real star - sharp and creating dueling character motivations in every scene. One of the better films of 2011.

A bit of an underwhelming experience here, mainly because I went in with big expectations. We're introduced to two politicians battling it out for an important primary win that will most likely lead to one of the men being elected president. Along the way we see the dirty deals and backstabbing that go along with politics. There's a great cast, though Clooney's direction is a little uninspired. The disappointment is that there's nothing here that we haven't seen in political dramas time and time again, and as I said, I guess I expected just a little bit more.

Let's take the long walk. This movie takes place during the frantic last days before a heavily contested Ohio presidential primary, when an up-and-coming campaign press secretary (Ryan Gosling) finds himself involved in a political scandal that threatens to upend his candidate's shot at the presidency. The Ideas of March was directed by George Clooney, and in my opinion Clooney's as a director is 50/50 for me. Sometimes he makes a great movie, and sometimes he makes a terrible or a dull movie, and this movie is in the middle of all of that. The cast in this movie is out of this world brilliant. We got Paul Giamatti, Philip Seymour Hoffman, George Clooney and Ryan Gosling in this movie and they all do good like always. The movie slows down in some parts of the film, but they where some …

"The Ides Of March" by Yojimbo

The press secretary and true believer of an up and coming presidential candidate uncovers a scandal leaving him with a moral dilemma that could potentially destroy this political golden boy's career. Based upon a play by Beau Willimon who was responsible for the American adaptation of the classic political drama House Of Cards, The Ides Of March has all of the kinds of cynical intrigue you'd expect of Frank Underwood's creator. The story is not quite as black-hearted as the TV series but the representation of modern politics being the product of back room deals, manipulation and blackmail certainly retains its flavour. Solid writing and a cast to die for make for a smart, savvy drama but at the same time The Ides Of March does leave you with the feeling that you walked in half way …

The Ides of March review

One of the underrated politically involved movies that is well-casted and carefully directed. A story of Stephen Meyers (Ryan Gosling), a junior campaign manager for Mike Morris (George Clooney), Governor of Pennsylvania and a Democratic presidential candidate. Morris' rival is Arkansas Senator Ted Pullman (Michael Mantell), and his campaign manager, Tom Duffy (Paul Giamatti), invites Stephen to talk privately. Meyers gets involved with an intern Molly Stearns (Evan Rachel Wood). Somewhat dull from the very beginning until the major snag was presented. Performances from the cast were sincere, score was fabulous and direction surprisingly effective especially during tense scenes. Screenplay could have been better. The Ides of March is a good look at flawed characters related to …

No posts have been made on this movie yet. Be the first to start talking about The Ides of March!