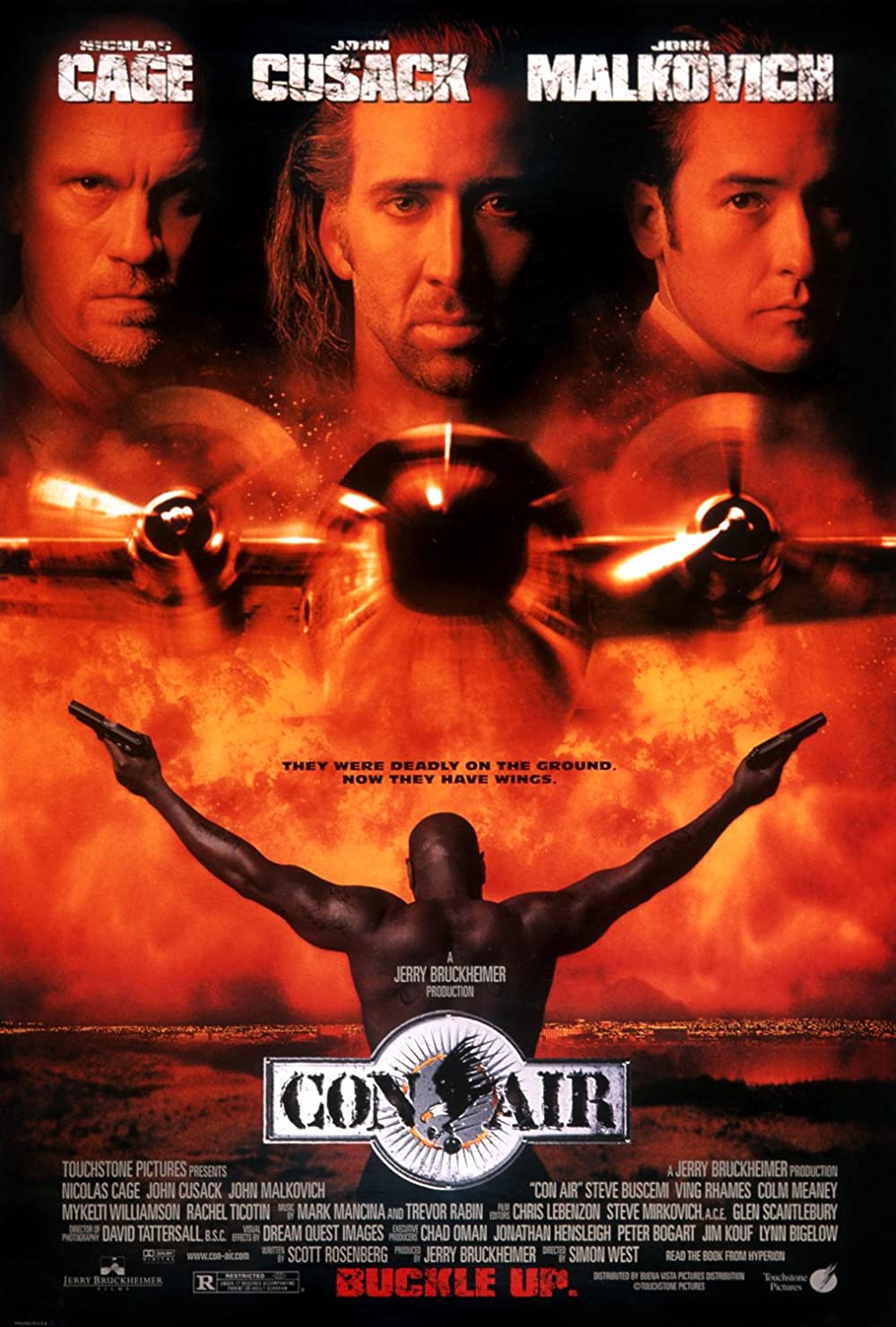 Plot: The Jailbird is transporting the nation's worst criminals to a new maximum security prison. When they revolt, it's up to an army ranger and a trusting FBI agent to stop them from pulling off their plan.

A over the top action flick with awesome one liners.

Con Air almost won me over with all of its insane action scenes, gargoylish supporting characters, and Malkovich's cold acting. In the end, though, it's just too cheesy and doesn't understand what movie it wants to be. Buscemi's serial killer is unnecessary and distracting and the film wastes a large cast behind too many explosions.

John Malkovich and Steve Buchemi was really good in this action packed flick. Nicolas Cage and John Cusack's characters were not that likable but still effective. Had a few cheesy lines and iffy scenes. The premise, soundtrack and direction was good. Movie seems to be well budgeted and had a decent screenplay. Con Air flies, not really a classic but enough to keep you excited about the picture but lacks character development.

How Did I Ever Live Without This Film?

OH YEA! What a good/bad film. Cage, Cusack, Malkovich, Rhames, Buscemi, that is a murderer's row of the good/bad actor hall of fame, OK Malkovich is just a legitimately good actor.

When a criminal with an all-time criminal name, Cyrus the Virus takes over a plane who do call? Not Sly, not Arnold, that's right, you get Cage.

Cage, as Cameron Poe, also a great name and great hair, he's the average-American Killer in all of us. Trained by the Army, but was just always in the wrong place at the wrong time.

When these two get together, BOOM, fireworks. This is a highly entertaining movie. It passes all parts of the watch test (did you or did you not look at your watch to see how much longer the film must go on). And the action never really stops. There's some great action …

Frankly, this film is just despicable. Terrible, gear-turningly contrived plot with awful, unbelievable dialogue (and no, the fact that it's a stupid Nicolas Cage action film is not an excuse). And then it has the gall to bring up the topics of rape and pedophilia. If this is a "man's film", then men shouldn't be permitted to make films because it's just so crushingly bad. Explosions! Because everybody likes things exploding for no reason! Of course the female prison warden who has received extensive training and knows how to handle herself around violent criminals would be easily subdued and nearly raped if Nicolas Cage wasn't there to rescue her! And child molesters? Turns out they're not so bad after all! I've said in the past that a film that has no brain doesn't belong in a cinema, …

Tom Selleck is nothing to this 'Innocent Man'

Great Nicolas Cage movie. I personally feel like that could have used Cusak and Potter a little better. Not enough story line for the two of them. Malkovich/Buscemi what can i say, their names state enough. I don't believe i was ever disappointed by either of them. Cage's character had good material to work with. The innocent man being sent home from prison and in the middle of a jail breakout on a plane, still tries to be the hero. The duo between Cage and Cusack works well together, their eye contact getting on the motorcycles was brilliant. Cage: yes i'm an ex-con and i'm helping you Mr. Federal Agent. Cusack: I know you had a raw deal. Just the thoughts that i believe went through these character's minds as they got on the motorcycles to stop Malkovich and his crew. I …

No posts have been made on this movie yet. Be the first to start talking about Con Air!