We Bought a Zoo Movie Information 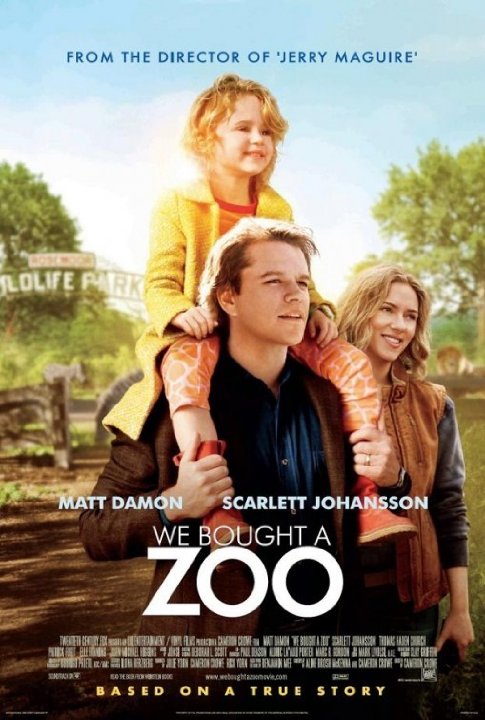 Plot: A father moves his family to the country in order to rejuvenate a run-down Southern California zoo. -- Chris Kavan

"We Bought a Zoo" is sweet, but offers only a fleeting and forgettable sense of encouragement.

Schmaltzy and cheesy to a fault. Typical Cameron Crowe stuff. Families will enjoy it though.

The film is about a father moves his family to the country in order to rejuvenate a run-down Southern California zoo. I thought this movie might suck just because the title bought a zoo, and did it suck and it didn't. I enjoyed this movie. it had good acting and good story.

We Bought a Zoo review

A newly widowed Benjamin Mee (Matt Damon) tries to forget the past by purchasing a house with a zoo. He does this to make his children, 7-year-old daughter, Rosie (Maggie Elizabeth Jones), and 14-year-old son, Dylan (Colin Ford) happy. Benjamin is assisted by Kelly (Scarlett Johansson), the head keeper. Damon solid as always in dramas while the gorgeous Johansson shows sincerity in her role. Wonderful soundtrack as always since it is the trademark from the director. If only it were more realistic and likened to the real story (Zoo was in England, Benjamin was British, took 2 years to purchase the zoo, etc.). Not sure why people take stories and tweak them, still it was entertaining enough. We Bought a Zoo is a good family flick (though there were a couple of swears) that touches …

Matt Damon turns in a very excellent performance as a recently widowed father, who decides the family needs a change after the loss of their mother. He quits his job from a dying newspaper and along with his a 7 year old daughter, (adorable Maggie Elizabeth Jones), and a 14 year old son, (Colin Ford) moves the family away from the city and their partying neighbors to the countryside where they take over a rundown zoo. Although his daughter immediately loves the idea the son is more resistant. Colin Ford does an excellent job as a troubled teenager, who feels that he has lost both of his parents …

"We Bought a Zoo" is a movie of a young father relocating his two kids to the country for a fresh start six months after the wife and mother passes away. It just so happens that this perfect house in the country has an established zoo in the back yard. The younger girl is excited about the move, but the teenaged son has deep resentment over it.

I heard critics liked it, but I thought it was preachy and melodramatic. It's not Matt Damon's best work. The two little girls in the movie were great. (Maggie Elizabeth Jones and Elle Fanning.) A surprise for me was that Angus Macfadyen was in it. He was hilarious. (If you have not seen Elle Fanning in "Super 8", watch it. She is adorable in it. That movie reminded me of the Stephen Spielberg movies I watched as a kid.)

No posts have been made on this movie yet. Be the first to start talking about We Bought a Zoo!