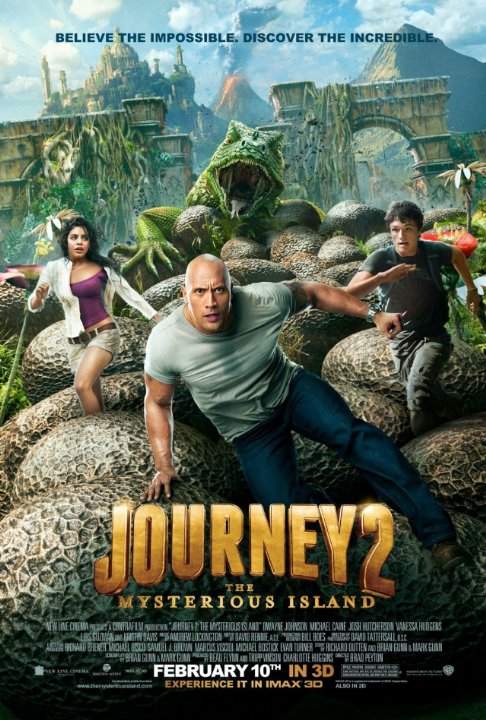 Plot: After his grandfather goes missing, Sean Anderson must team up with his mother's boyfriend in order to find him - an adventure which leads to a mysterious, mythical island. -- Chris Kavan

Let the journey begin again. Journey to the mysterious island. this film as one good thing about it is that the island look's good and that's it.the visual effect's in this movie look's so fake and that's it.

A journey to an unknown place is what Sean Anderson (Josh Hutcherson) wants to do after receiving a coded signal from his missing grandfather. Together with his stepfather, they go to Palau which is the first stop of their journey to the Mysterious Island. *** I can't remember any reason why I listed this film to "Movies I Want To See" but anyway, I saw the film and nothing really special on it. Bad visual effects, not really a fun adventure to be excited about, a material good for the actors not to perform their best. I know this film is intended for kids, but hello, I've seen lots of movies for kids and several of them turned out to be fun and exciting for kids at heart like me. So, no excuses accepted!

Have on idea why I would want to see this movie ever again. The story does not work! Boy who misses his grandfather goes searching for him with his stepfather. O.K. op til now I'll follow. Than they enter an island and find the grandfather, all too easy. The Island has a unique fauna, but the strange thing is: the island sinks to the bottom of the ocean once in a while. Where does the fauna and stuff go? Easy watching, no nightmares but also not in for a rerun.

A dog and pony show

Science says that, imagination is not just a part but also a depth in understanding its core. In the movie, Journey 2: the mysterious island, the island is full of wild imaginations and more looks like an old fairy tale said to children. But this is no children movie. It is far from insanity and more evolved with some huge creatures and also tiny objects. The big ones are small and small ones are big, hence it is the mysterious island. Brad Peyton (famous for Cats and Dogs part 2), had taken up this part to direct, along with screenwriters Brian and Mark gunn. Warner Bros and New line cinemas distribute the wholesome fun filled entertainer. This movie is careless. With the previous movie, he has shown that plot might be as silly as possible. The coliseum of imagination has run wild and …

So are you ready for a adventure ?

This is a very enjoyable and likeable movie with lots of good humour. it has some very good effects and is well made and suitable for all the family. The story is very simple. a kid and his stepfather hook up with a father and daughter by means of travel to search for the mysterious island where they believe the kids grandpa is ( michael cain ). once they arrive the adventure begins in the shape of giant creatures and nemo's atlantis.
i found it to be a feel good kind of movie with some fine effects and well worth watching.
The downpoints are....The very simple story dont expect much more than to be entertained. and i would of liked to of seen more creatures iin it. but overall it should make you smile .so are you ready for a adventure?

No posts have been made on this movie yet. Be the first to start talking about Journey 2: The Mysterious Island!