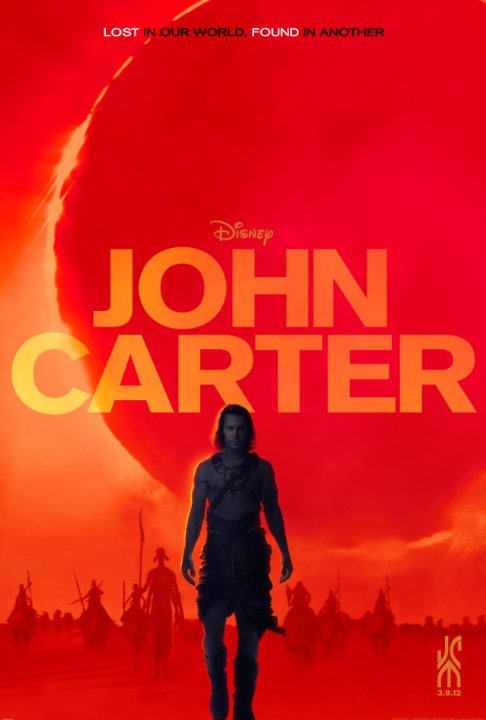 Plot: A Civil War veteran finds himself transported to Mars, which contains a lush, tropical world inhabited by massive, green barbarians and a princess in need of a hero. -- Chris Kavan

No wonder this movie bombed.

I'm probably one of the dozen or so people who not only saw John Carter in theaters but thoroughly enjoyed it. It is not without its flaws but it is an earnest and lovingly old-fashioned science fiction/adventure movie in the vein of Star Wars and Avatar. Perhaps that is because the original John Carter novels inspired Star Wars and Avatar in the first place. Fx are great and the action is entertaining. The alien dog sidekick (yea it has one of those) is what Jar Jar Binks should have been. This thing was hilarious! The movie itself contains a self-contained story but you can tell they were hoping for a sequel. Cuz that's gonna happen, right =/?

John Carter has some amazing visual elements that are some of the best I have ever seen; the cgi is absolutely fantastic and certainly makes the film easy to watch. It's easy to see where the money was spent on this project. However, it suffers considerably due to major pacing problems, making the film feel uneven. Thus resulting in a film that, unfortunately, is disappointing and forgettable.

A US cavalry officer is accidentally transported to Mars where he encounters a warring civilisation who require his help to end the conquest of their world by a brutal warlord. When talking about cynical marketing campaigns, it's usual to point to terrible films that become big hits through licensing, advertising and sponsorship deals, but the other side of the coin is John Carter. To say that this film bombed at the box office would be an understatement of the highest order. Those responsible for the marketing of this film fumbled the ball on such a colossal scale that it couldn't hope to recoup the reported budget of $250,000,000 despite the fact that it really isn't all that bad. It's fair to say that you can see where the money was spent; it's a very attractive film packed with nice …

The movie begins in the late 1860s, at which point Virginia-born John Carter (Taylor Kitsch), is a Civil War veteran who is trying to lead a normal life. He is locked up for refusing to join the Army, but he escapes and is pursued. As he attempts to find shelter for himself and a wounded officer, Carter accidentally stumbles upon the cave of gold he was seeking.
Carter's surprise soon turns to shock when he's attacked by a mysterious robed man who appeared out of nowhere holding a medallion. When Carter touches the glowing medallion, he is transported to habitable and populated planet Mars â or, as the locals call it, Barsoom. Of course, Carter at first has no idea where he is but soon realizes that he has incredible leaping abilities due to the lower gravity of the planet.

John Carter is a movie that displays some sheer senseless fun with some good spell of thrills. It is a movie of big budget and we can consider a fact that Disney has decided to pull the chords of money again with John Carter. It is a realization of what makes a simple lead story coupled with teleportation to the other world or planet. Directed by Andrew Stanton (famous for finding nemo, toy story), John Carter is a visual ride with lots of graphic images and visual effects entangled with a slight portrayal of a mean plot.

Plot of the movie is about Captain John Carter (Taylor Kitsch) a veteran captain of the Virginia region. He accidentally comes in contact with a small metal object that transports him to barsoon the mars. He starts developing skills and one day he becomes the hero of …

No posts have been made on this movie yet. Be the first to start talking about John Carter!