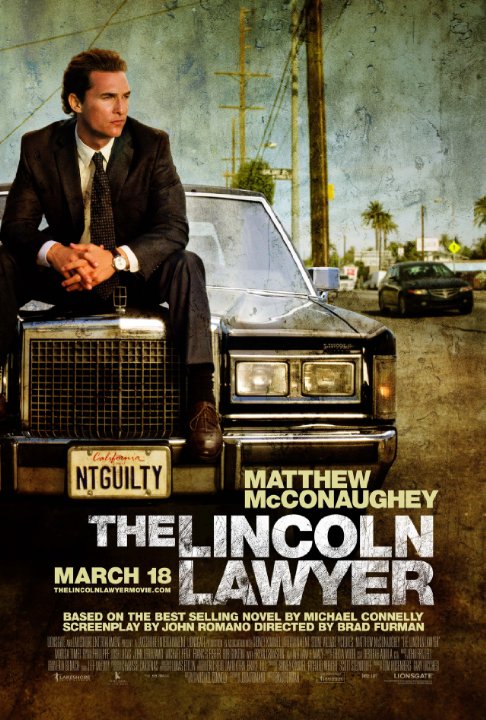 Plot: A lawyer who works out of the back of his Lincoln Continental has made a living defending small-time cases, but he lands a the case of a lifetime when a Beverly Hills playboy murder comes his way but he soon realizes that the case makes him a target as well. -- Chris Kavan

When Matthew McConaughey started to become a fantastic actor. The story is about a lawyer who works out of the back of his Lincoln Continental has made a living defending small-time cases, but he lands a the case of a lifetime when a Beverly Hills playboy murder comes his way but he soon realizes that the case makes him a target as well. This movie was well acted and well put together.

I was pleasantly surprised by this movie. I was curious how McConaughey would handle a courtroom drama. I've never seen "A Time to Kill". Someone said he should play lawyers, which I can't help but agree. One of the better courtroom dramas. The courtroom scenes, while nicely written, weren't very passionate. The ending twist was great as well.

As a courtroom drama, I suppose it was better than the majority I've seen - but in the end, it was still a courtroom drama and even though Matthew McConaughey worked well, it moved a bit slow for my tastes. Not to say there weren't a few good twists, but nothing that elevated it above standard fare.

A defense attorney Mickey Haller (Matthew McConaughey) rides in a Lincoln and defends those conviceted of a crime. His latest client is a prominent Louis Roulet (Ryan Phillippe) with connections. Mick is aided by private investigator Frank Levin (William H. Macy) and has a child with prosecutor Maggie McPherson (Marisa Tomei). The film's story seems to be slow, and the real plot delayed. Soundtrack and direction were good but this critic feels McConaughey is not that impressive, and we the viewers are captivated with the premise with a slight twist. For courtroom dramas, 12 Angry Men, To Kill A Mockingbird and A Few Good Men were more entertaining. Nevertheless, despite The Lincoln Lawyer's snail paced storytelling and talented cast, it is worth a watch for its ideals of …

I really enjoyed this movie. Fairly new director Brad Furman did a pretty good job of taking the screen writing of an outstanding book by Michael Connelly and making a very intense film. To make his job easier, he had an oustanding performance by Matthew McConaughey as the lead character. And in my opinion, it is his best work since A Time To Kill. I think Matthew ought to scrap all RomComs and concentrate on dramas like the 2 aforementioned films. This film starts out a little slow, but gains steam about a third of the way into the movie and ends with a "Bang". A fantastic supporting cast of William H Macy & Marisa Tomei (two of my favs), Ryan Phillippe, Josh Lucas, and Francis Fisher help make this a must see!! Also check out the cameo by Country Singer Trace Adkins...

Itâs refreshing to see Matthew McConaughey in something other than a romantic comedy for a change. Not to worry ladies, the shirt comes off in at least one scene, so youâre still getting what you expect. In âLincoln Lawyerâ, McConaughey plays defense attorney, Mick Haller, a slick, conniving lawyer who works all the angles and is obviously in the trade for the payday. McConaughey practically wears this part like a comfortable pair of slippers and the audience is immediately in tune with his character and motivations.

Joining him is Marisa Tomei (âThe Wrestlerâ, âWild Hogsâ, and yes, âMy Cousin Vinnieâ) as his ex-wife, Maggie McPherson. While they are supposed to be divorced in this, youâd never know it from their actions and exchanges, other than McConaughey …

No posts have been made on this movie yet. Be the first to start talking about The Lincoln Lawyer!