The Girl with the Dragon Tattoo Movie Information 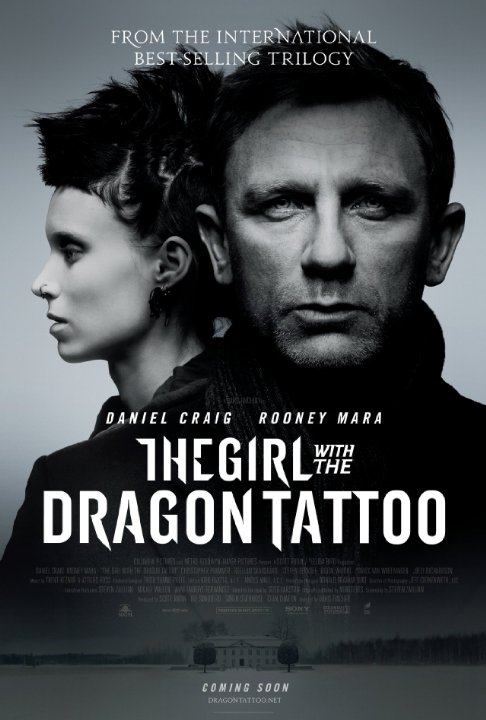 Plot: David Fincher's adaptation of Stieg Larsson's popular novel: Disgraced journalist Mikael Blomkvist teams up with a brilliant hacker and loner Lisbeth Salander in order to solve a 40-year-old mystery that has plagued the scion of a powerful family. -- Chris Kavan

David Fincher's version has some significant changes but keeps the dark and ardent atmosphere of the 2009 film, however it's hardly a match for the Swedish original.

Disgraced journalist Mikael Blomkvist teams up with a brilliant hacker and loner Lisbeth Salander in order to solve a 40-year-old mystery that has plagued the scion of a powerful family. David Fincher you did it again, You made another dark but brilliant film. the last time I sawed Rooney Mara was in the 2010 remake a nightmare on elm street and she was terrible in that movie but in this film she is fantastic and to be honest I never know she was a great actress, Daniel Craig was also great in this film and so did the other cast.

I loved it! I personally liked it a lot more than the Swedish version (both are brilliant films). A little long. Rooney Mara is brilliant, we'll be hearing about her in the future. The opening credits are super stylish and epic.

"The Girl With The Dragon Tattoo (US)" by Yjimbo

David Fincher is brilliant. I thought he had maxed his potential with Fight Club and Seven, but he came & did it again. Having not seen the Swedish film or read the novel, this was a completely new story for me. & I was blown away! Daniel Craig gives a solid performance as Mikael Blomkvist, a disgraced journalist tasked with solving a 40 year old murder. The supporting cast is excellent as well, in particular Christopher Plummer & Stellan Skarsgard. But the real star is Rooney Mara, as Lisbeth Salander, an emotionally damaged and unstable woman bordering on insanity. In every scene, she owns the character. She's fierce, gothically sexy, and unbelievably smart and unique. David Fincher is known for his dark, edgy style & it shows in this film. The cinematography is fine as is the musical …

The Girl with the Dragon Tattoo (2011) review

Much like the original Swedish film, Mikael Blomkvist (Daniel Craig) is the co-owner of "Millennium" magazine and Lisbeth Salander (Rooney Mara) a researcher for Milton Security and a computer hacker. Henrik Vanger (Christopher Plummer) assigns Mikael to probe his nieceâs murder, Harriet, 40 years ago. Vanger Industries CEO Martin Vanger (Stellan SkarsgÃ¥rd), decide to invest in Millennium magazine. Noomi Rapace was more effective than Mara in line with their wonderful character. There are times you cannot comprehend the words coming from Rooney Mara. This version had a bitter ending though the soundtrack and cinematography were effective. The Girl With the Dragon Tattoo had some plot confusion, overall itâs a good drama thriller that was somewhat similar to the original, …

I had never read the books, or watched the original films, but I genuinely enjoyed this film. &amp;nbsp;I think that most other film fans will appreciate it and most of the mainstream audience will be turned off. &amp;nbsp;There isn't really a middle ground with this kind of movie.

This is just as good as the original - and even better in some aspects (namely the score and the perfect cinematography). I found it to be darker than the original. I rated it the same in the end:Girl with the Dragon Tattoo, The (2011)Fincher's Dark Vision is a Worthy Remake3.5/4 starsI am a fan of the original Swedish version of the film, and when I first heard they were going to do an American remake, I had my doubts. Yet when I heard David Fincher was attached, I was suddenly interested &hellip;

I always have high hopes for David Fincher. I didn't think anyone could make a compelling movie about Facebook of all things, but he proved me wrong.I loved the book and also thought the Swedish version did a good job. Fincher looks like he's going a bit darker on his route - which is okay by me. If anything - that's what was missing from the Swedish version. I will second you - this is also my most anticipated film of December and Oscar season.

I think this is the movie I am most looking forward to for the Oscar season. I think Melancholia also looks promising for me. Will this be as good as the original?