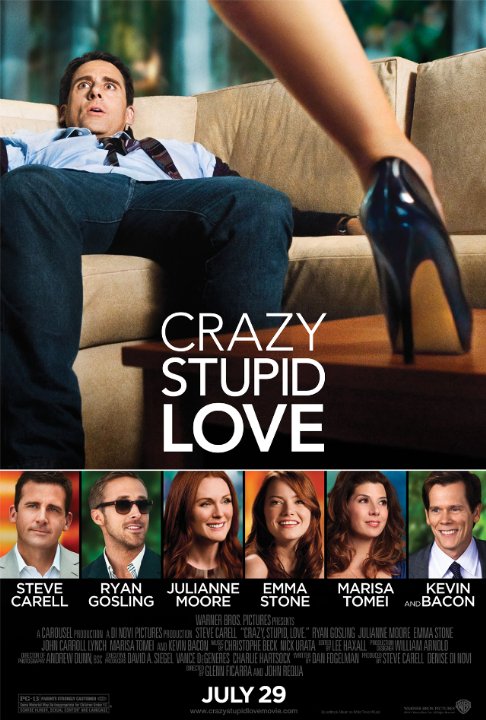 Plot: A father finds himself in over his head when he's forced to deal with a marital crisis and maintain the relationship with his children. -- Chris Kavan

All crazy, Some stupid, all of that is love. This movie is about a father finds himself in over his head when he's forced to deal with a marital crisis and maintain the relationship with his children. This movie has a great cast and characters in it, But there are some scenes in the movie when the movie drops into the cliche pool of cliches, You know when one of the Characters found out some thing horrible and then they fall out which each other.

Number 23 on my all time top movie list. I've seen this movie many times and i love it every time. Just really good on every level.

The cast in 'Crazy, Stupid, Love' carries a generic plot to greater lengths making this movie great. The story and the characters are hilarious and awkward. This a great movie about love, hurt, friendship, and sex. The relationships are realistic and believable. Gosling and Stone actually have chemistry on screen and make there relationship better than the writers wrote it to be. This is a must see with the wife/husband.

Great blend of Cute and Serious!

Steve Carell plays Cal, a likable middle-aged man whose wife, Emily, (Julianne Moore) suddenly requests a divorce after 20+ years of marriage, along with an announcement that she has cheated on him with her coworker David (Kevin Bacon). Cal is understandably blindsided by these revelations; he is one of those dopey husbands who assumes everything is fine when no one is complaining.

Heartbroken, Cal eventually turns to the rich womanizer Jacob (Ryan Gosling) a six-packed sexy ladies man who is slicker than slick who offers to teach Cal all he knows so he can hopefully 'regain his manhood'. The two bond during their experiment and the former loser turns into a lustful predator, managing to bed nine women in no time. But things become complicated when Emily begins to show feelings for …

This was a great movie about all the different types of love in the world and the people who fall into them. You have first time love, unrequited love, new love and old love. What is great about this movie is how it brings them all together seamlessly and keeps the whole movie moving while doing it.

The movie starts out and mostly revolves around Steve Carell's Cal Weaver and his Wife Emily, played by Julianne Moore, ending their marriage after 25 years. Cal loses everything his wife, his house and even his best friends(His wife says they as a couple have chosen to support Emily not Cal). Cal tries to move on and meets up with the shallow womanizer Jacob, played to perfection by Ryan Gosling, at a bar. Jacob take it upon him self to help Cal. He does this by changing the way he …

Emily (Julianne Moore) admits to her husband that she had an affair with David Lindhagen (Kevin Bacon), her co-worker. Jacob Palmer (Ryan Gosling befriends the aching Cal Weaver (Steve Carell) by teaching him to womanize. He becomes successful with Kate (Marisa Tomei), who is the teacher of his son Robbie (Jonah Bobo). Calâs daughter Hannah (Emma Stone) becomes involved with Jacob while Robbieâs babysitter Jessica Riley (Analeigh Tipton) has a crush on him. A few nice lines: Jacob â âI'm wildly unhappy, and I'm trying to buy it, and it's not working.â Cal â âI will never stop trying. Because when you find the one... you never give up.â A film about marriage, love and maturity though I just find it hard to see Steve Carell in dramatic roles, Marisa Tomei was …

No posts have been made on this movie yet. Be the first to start talking about Crazy, Stupid, Love.!