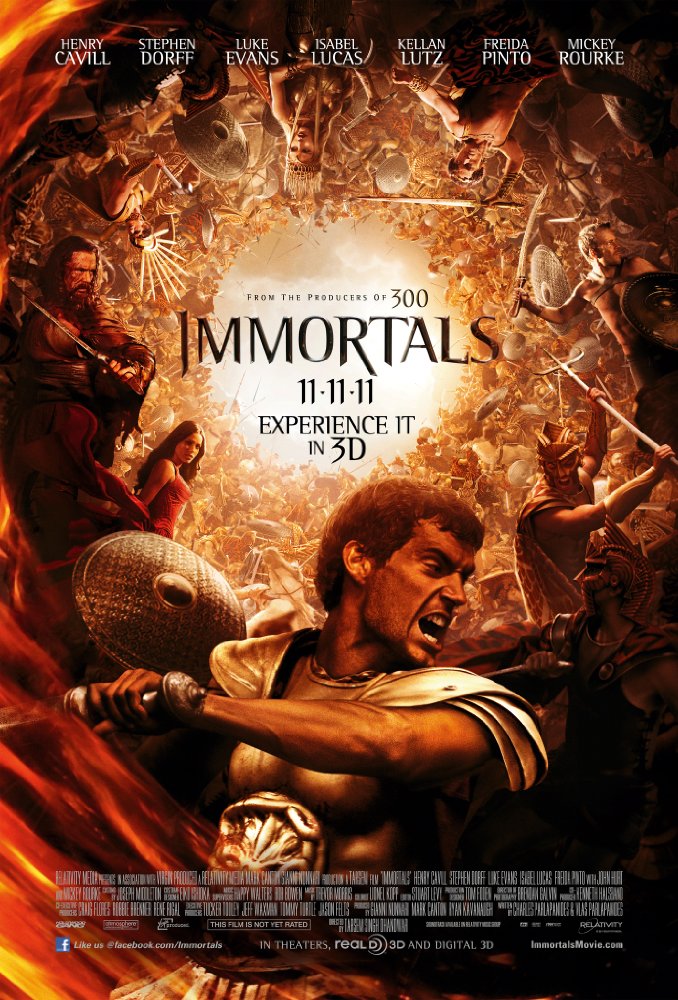 Plot: Years after the gods defeated the titans and sealed them away, King Hyperion, mad with power, unleashed his disfigured army upon Greece in search of the legendary Epirus Bow - a weapon forged by Ares himself. With this weapon he plans to free the titans. The gods, unable to step in directly, instead put the burden of saving mankind upon a peasant named Theseus, who is charged by Zeus to stop the mad king. -- Chris Kavan

This movie is like if 300 got all the goodness and bad-ass scenes sucked out. Therese something about Tarsem Singh movies that I don't like. He knows how to make a movie look good but at the same time he makes it look too colorful and clean. The visual's effect's in the movie looked faked and the acting is dreadful. I couldn't understand what mickey Rourke was saying in this movie, did he took acting lessons from Stallone or something.

In my opinion a better story and a better movie than 300. Sweet battle scenes.

I didn't like acting, writing, 3d... Only thing that's good is atmosphere

With the titans locked on their cell, greedy King Hyperion wanted to free them. Gods appointed peasant Theseus to save mankind. He was given legendary Epirus Bow to go up against the King and avenge his mother.

Honestly speaking, I didn't like this movie, not that I hate it, it's just that few things are well appreciated. While watching this with a friend, we can't focus because of its dull appearance. Why it has always to be at the edge of mountains? The palaces seemed to be so small? Weird costumes. Awkward shots of the Gods. I thought Greece and its lands should look like a paradise, a place where people can comfortably think, philosophize. Obviously, it turned out to be a distracting set trying hard to look like a battlefield with so much drama on it.

The story: similar to 300, Troy, and to a certain extent, this movie is about the old days. The difference between Immortals and the others is that this one introduces The Gods, which makes it that much better. They are more powerful than humans and have excessive skill. Very cool, yet thin, characters. The story is not ground breaking, but I don't know of a movie that finally includes true Gods and Warriors like this.

The Cinematography/Style: As you would expect with Sing helming the project, the style is …

While marketing would suggest that Immortals is the next 300 - and while the style and even the plot somewhat mirror that spectacle, Immortals is more of a shadow to that film than a successor.

Comparisons: A small group of warriors going up against a huge force commanded by a monster. A traitor who betrays his own army and provides damning intel for the enemy. Plenty of slo-mo violence involving various weapons - including one attack scene that looked like it could have straight out of God of War.

The story revolves around an army led by King Hyperion - a man who enjoys torture, murder and being merciless, as played by Mickey Rourke. He probably kills kittens in his spare time when not roasting women alive or having men's testicles smashed in by large hammers. Rourke snarls his …

No posts have been made on this movie yet. Be the first to start talking about Immortals!