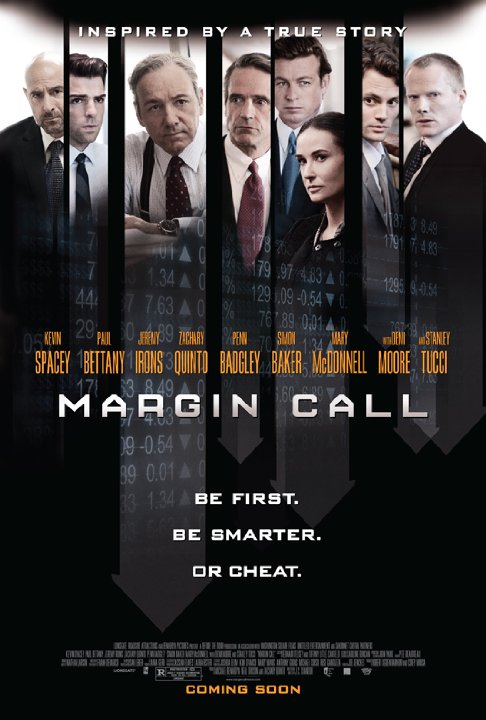 Plot: Tense action as we follow one 24-hour period at an investment bank just before the financial crisis hits. -- Chris Kavan

This is one of those movies where everyone calls flawless but I think it's well done on a acting and directing point of view, but I do think it's a bit overrated in my opinion. The story to Margin Call takes place in 2008 as a tense action as we follow one 24-hour period at an investment bank just before the financial crisis hits. Margin Call is a movie that I thought was alright. I do think the movie is well acted and nicely written, but to me the movie is a slow burn and I just don't think it's brilliant as people thought it was. It's not a bad film but I don't think it's a great film, just alright in my opinion.

Brilliant film! Great cast. Fantastic screenplay. While I'm not an expert in business/economics, the dialogue in this film was engrossing and powerful. One of my favorites of 2011 and one of the best as well! I plan to watch this again soon.

Excellent script, very good performances. Director/Writer JC Chandor has done it to turn a serious topic into a packing drama. Worth a watch!

Eric Dale (Stanley Tucci) from risk management was let go. He gives a US to Peter Sullivan (Zachary Quinto) to finish his work. Peter discovers that because of excessive leverage, if the firm's assets in mortgage backed securities decrease by 25%, the firm will suffer a loss greater than its market capitalization. Sam Rogers (Kevin Spacey) is notified about the confidential information. Those involved, Jared Cohen (Simon Baker) and head of risk Sarah Robertson (Demi Moore), and finally CEO John Tuld (Jeremy Irons) discuss on possible solutions.

Premise was good if only the details were better in terms of the nature of the business, history, character development and the like. Soundtrack was almost non-existent but because of the castâs talents, it overshadows certain aspects of …

No posts have been made on this movie yet. Be the first to start talking about Margin Call!