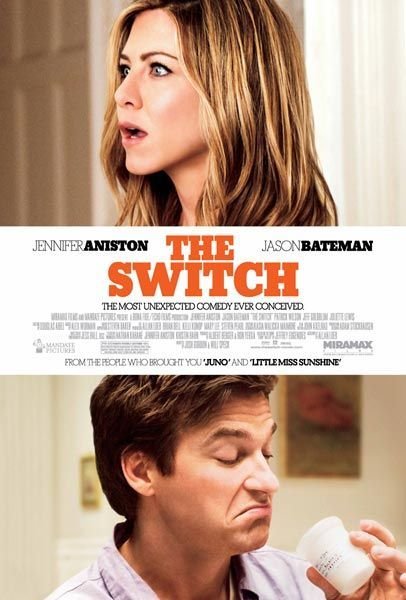 Plot: A woman turns to self-fertilization to have her child, but seven years later she meets up with her best friend who's been keeping a secret: he secretly switched her preferred sperm sample with his own. -- Chris Kavan

Interesting to see only 44% (RT) of users liked this? I personally enjoyed it a lot more than I thought I would. A formulaic rom-com, but the film has some more serious undertones as well. I cared for the characters of The Switch more than those of other films of the genre. I recommend this if you haven't considered it already.

I'll be honest,i thought this movie was going to be terrible and pointless.but i was so wrong.this film is not a luahg out loud of funny,matter of fact it's not even that funny.but that's not what this film is about.it's about these characters and the struggles they go through during the course of this film.I really did love this heartwarming,charming,fun film.it keeps you wondering and wanting more.matter of fact,by the time the film ends,you want more.Jason Bateman and Jennifer Aniston work together amazingly,i thought they were going to be terrible,but yet again i was wrong.,great film,see it.

A simple idea that becomes a romantic comedy. Jennifer Aniston was fun to watch unfortunately the male lead's character was not memorable. Had a few comical scenes but it also had dull moments were you just cringe. The Switch could have been better if the script was more witty and the actual lead character was engaging.

Kassie (Jennifer Aniston) and Wally (Jason Bateman) play long-time best friends who don't realize they are right for each other. When our heroine hears her biological alarm clock ringing she opts for artificial insemination because she is sick and tired of waiting for the right guy to show up. She finds a willing sperm donor Roland (Patrick Wilson) and even throws a party on the night she's to be knocked up. Wally shows up at the party, accidentally âhijacksâ the donated sperm and replaces it his own but is too drunk to remember doing so. Kassie moves to Minnesota to raise her son, Sebastian (Thomas Robinson), but returns to New York seven years later and back into Wally life. Wally begins to see striking similarities between him and Sebastian and he begins to wonder if he could …

Not Bad, But Not Great

Single, 40-year-old, Kassie Larson (Jennifer Aniston) has a biological clock that is not just ticking, but screaming for her to conceive before itâs too late. When she shares her artificial insemination plan with her one-time romantic interest and best friend, Wally Mars (Jason Bateman), his misgivings get the better of him. What follows is a hilarious and sometimes touching series of events as Wally confirms and reconciles the fact that Kassieâs (now) 6-year-old son is actually his.

Co-directed by Josh Gordon and Will Speck (both previously did âBlades Of Gloryâ), âThe Switchâ manages to cram a lot into its hour and forty minutes of run time. There wasnât a moment where the movie seemed to drag, as each scene was well paced and pertinent to the overall story. …

No posts have been made on this movie yet. Be the first to start talking about The Switch!