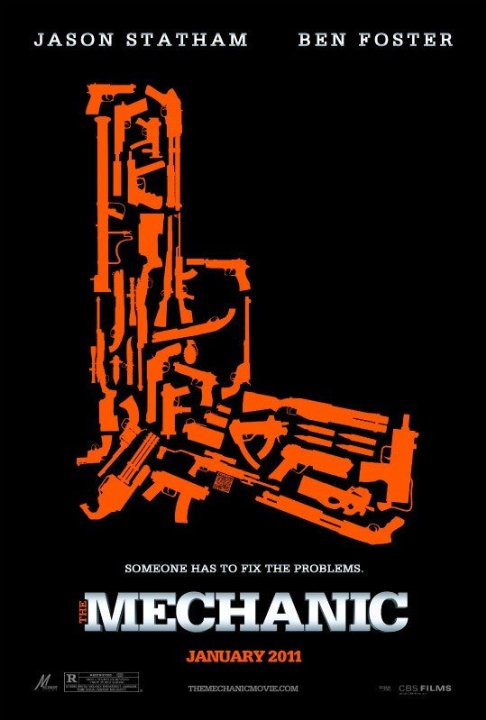 Plot: A seasoned veteran takes an aspiring hit-man under his wing, but things really heat up when someone betrays them. -- Chris Kavan

What a let down this movie was.

One of the first Statham film's I've seen. Wonderful direction and action sequences that keeps your adrenaline flowing. The Mechanic even has a good cast and sincere acting. Definitely a must watch for those who enjoy films related to hitmen.

This is the 1st Jason Statham flick I've seen so I can't compare it to any of his other movies but I'm a BIG fan of Charles Bronson & I still like the original better.This version of The Mechanic had alot of action but I'd still choose the original

"The Mechanic" by Yojimbo

A professional assassin for hire grudgingly fulfils a contract on his old mentor and so takes in his delinquent son and teaches him the tricks of the trade. The DVD cover of The Mechanic bellows "FROM THE DIRECTOR OF CON AIR AND LAURA CROFT: TOMB RAIDER" and if I'd noticed that before, I wouldn't have bothered. But to be fair, gone is the cartoon silliness of the likes of The Transporter and Crank leaving this latest Jason Statham project with all the hallmarks of what has become his stock in trade; an unpretentious and economical action film that delivers the goods with a minimum of fuss. The plotting is unimaginative but solid, the performances suitably steely and laconic and the set pieces executed with style and energy. It's not art but it never pretends to be; The Mechanic aims to …

My kind of film: dark, gritty and bloody!

Arthur Bishop (Jason Statham) is the perfect hit-man or lethal assassin (whichever you prefer to call it) who works for "the company", which is never named, so I'm going to call it Evil, Incorporated. Evil, Inc is run by two guys: the soft spoken, wheelchair bound older guy Harry (Donald Sutherland) who's been Bishopâs friend since forever. The other guy has a corporate haircut, wears an expensive suit and rides around in a convoy of sleek black vehicles, accompanied by sunglasses-wearing men with guns.

Being a hit man is a job that requires professional perfection and total detachment, and Bishop is the best in the business but when his mentor and close friend Harry is murdered, Bishop is anything but detached. His mission grows complicated when Harry's alcoholic loser son Steve …

No posts have been made on this movie yet. Be the first to start talking about The Mechanic!