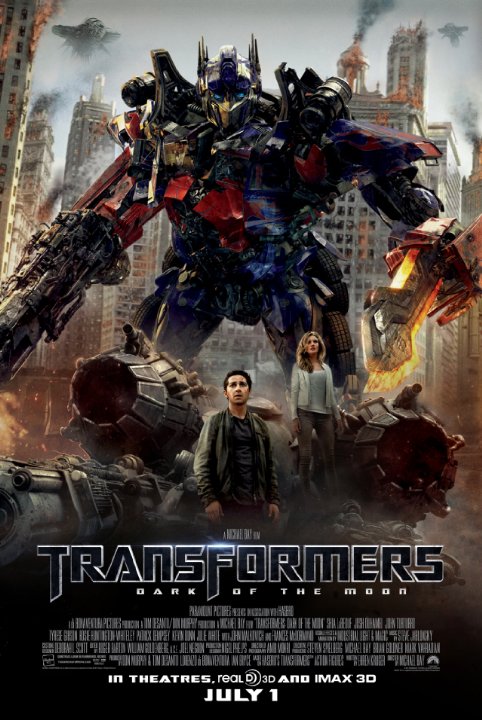 Plot: As the decepticons look to avenge their defeat against the autobots, a space race between Russian the U.S. sparks the interest of both groups. Sam Witwicky once again comes to the aid of the autobots while back on Cybertron, Shockwave has plans of his own. -- Chris Kavan

The Transformers looked cool with all the swords and cloaks and sawed off shotguns and stuff. Clearly aimed at younger audience. The city set pieces reminded of Avengers.

Prime KICK-ASS.transformers 3: dark of the moon. this movie is a little better then number 2 because in transformer 2 we what prime to kick-ass but he get's killed.good visual effect/good sound/acting is not Bad.am going to give this a 2 and a half out of /4 star's "it's okay".

This film frustrates the heck out of me. I had high expectations, I wanted to like it so much. But I cannot because there is too much of the film that is just BAD! Essentially everything that held the second film back holds this film back as well. Horrendous dialogue, useless characters, annoying characters, preposterous plot, lame attempts of humor...it was just not very entertaining. The action in this film is pretty AMAZING! I was so entertained by the second part. The effects, sounds, explosions, music was all perfect. Michael Bay is definitely a master of awesome action. But in-your-face non stop action is not enough for a good film.

Fan freakin' tastic!!! How anyone in their right mind could sit and condemn this series is totally beyond me! State of the art CGI action coming out of your ying yang with colorful charectors of epic proportions!! In this latest gem from the cream of the crop action blockbuster director Micheal Bay we see that after a series events revolving around NASA's moon landings, the evil Decepticons still ruled by and evil and steel fist of the villainous Megatron (Voiced by the ultimate villan actor himself Hugo Weaving) plans on turning mother earth itself in the new home planet Cybertron. So it's once again up to the autobots along with human Sam Witwicky (Shia Lebeouf) and his new girlfreind Carly (Played by newbie Rosie Huntington Whiteley) To once agon restore peace on earth!

Good One but Too Long

Without the knowledge of everyone in the Earth, when U.S sent people on the moon, it was not just an exploration but was another political move. The Autobots have Sentinel Prime on their side, not until they find out a secret allegiance kept since Neil Armstrong and his team stepped the dark of the moon.

First of all, this movie was a long one for me, more than a couple of hours i know. The movie started boring and confusing for me. I haven't seen any Transformer movie before, well, I remember I saw one but I didn't pay too much attention to it so I forgot what it was all about, all I remember was Megan Fox was there.

But surprisingly, at the middle of the film, I liked and appreciated the story, though I wished it ended when the Autobots flied away from Earth, I loved the …

My advice - Do not pay to see this in a theater. Rent it if you must; at Redbox when it becomes available on dvd. Better yet, ( Just forget they made this third movie attempt), you will be thankful you did. This was a strain to sit through. The animation characters far surpassed the human acting one hundred fold. I sat through the whole movie only to leave disappointed and very very exhausted. The first two transformer movies set the ground work for this, the third movie in the series, to be the best. Of course, it failed horribly. Megan Fox can be truly thankful she was not apart of this movie. What got me is they tried to start this movie by showing Rosie Huntington-Whiteley's behind - really!!!
I never was able to settle in and enjoy what I was hoping to be the best Transformer …

No posts have been made on this movie yet. Be the first to start talking about Transformers: Dark of the Moon!