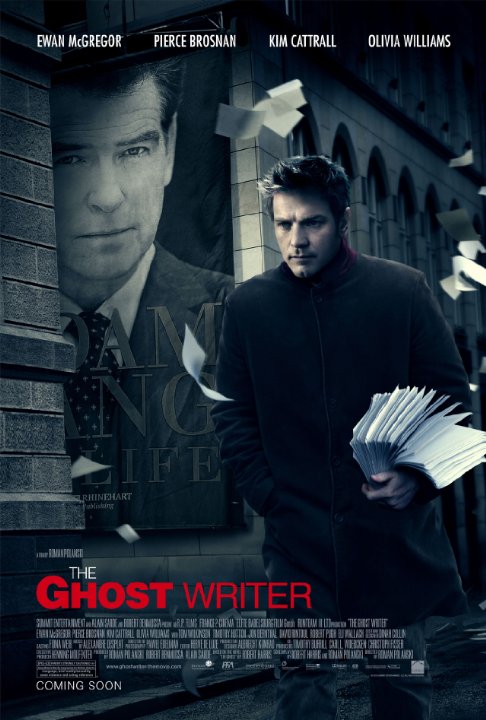 Plot: When a man is hired to finish the memoirs of a former British prime minister, he uncovers information that puts his life in jeopardy. -- Chris Kavan

Roman Polanski's mystery thriller is a well directed drama. The political intrigue was suspenseful and the ominous tone reflected real life frustration and dread at the tail-end of the War on Terror. Pierce Brosnan is both compelling and pathetic as a tool of a politician. Ewan McGregor is cast well as the naive apolitical hack who uncovers a conspiracy.

The ghost/ the ghost writer, make your mind up.

A good watch! Keeps your interest. Got some pretty faces, not so nice people and politics in this story. An interesting cast collection. Ocean views of Mass. make for a nice setting. I recommend this one.

"The Ghost" by Yojimbo

A populist ghost writer is employed to rewrite the memoirs of a former Prime Minister but when the politician is accused of war crimes, he becomes increasingly fearful for his safety. The Ghost is a very old school cold war style political thriller that is based upon a character who is purely fictional and in no way represents anyone living or dead - especially not Tony Blair, nosiree Bob. Roman Polanski has always had a knack for paranoid conspiracy thrillers and this understated yet suspenseful example follows very much in the footsteps of Hitchcock, revolving as it does around an everyman protagonist who finds himself completely out of his depth when he blunders into intrigue. Although it is set mostly in America, The Ghost has quite a European flavour with a quality cast of character …

This may just be Roman Polanski's masterpiece. This is just as good as Polanski's Oscar winning movie, The Pianist. The Ghost Writer is based on the 2007 Robert Harris bestselling book, The Ghost, Ewan McGregor plays this guy, who is nameless in both the book and movie, they simply refer to him as The Ghost. So, he is hired to ghostwrite the memoirs of the former British Prime Minister Adam Lang(Pierce Brosnan) after Lang's previous ghost writer he mysteriously drowned. The Ghost decides to take the job, he was convinced by his agent that this was a once in a lifetime opportunity. The publisher has sunk $10 million into Lang's memoirs and the deadline is only a month away, he has to work fast. The Ghost is getting paid very well though, for one months work on this, he gets a quarter of a …

No posts have been made on this movie yet. Be the first to start talking about The Ghost Writer!