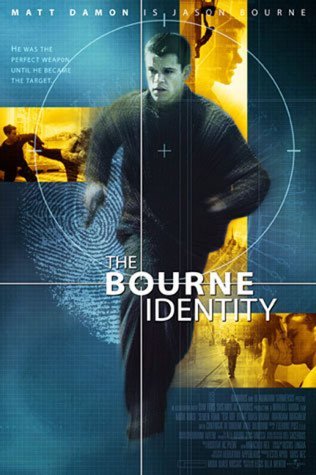 Plot: A man is rescued by a fishing boat with no identification or memory. Assassins are on his trail as he frantically tries to unravel the truth behind his life.

Matt Damon was born to play this role. the Bourne Identity. Okay this is going to be a short review so let's go.this movie is brilliant the action scene is well done and the director is good to.

I really enjoy the action movie genre. From the big explosions, to the fight scenes, to the mostly horrible dialogue. This movie fits that bill in spades and I enjoyed it, but there is one thing that stops me from putting this movie on top of my action list = it's leading lady. Franka Potente makes me cringe whenever she's on the screen I don't know what it is about her. There is nothing there that would make me route to for Matt Damon to get in trouble on her behalf or save her when the going gets tough. There is something about her that is distractingly unattractive. I did my best to ignore her in every scene, but it just didn't work.

Doug Liman directs this action film with efficient brutality. There are some fantastic chase and fight sequences, but they are straightforward and have the same air of desperation as Damon's character throughout. A slick and frill-less adaptation of Ludlum's masterwork.

Though it's not quite the incredible film critics were making it out to be, The Bourne Identity manages to entertain the whole way through, and it's hard to imagine someone being bored during the film.

A body of a man is found floating in the ocean. This man has no idea who he is, who he was, or anything about his past. His ability to speak many different languages and provide detailed summaries about surroundings and people by just glancing at them suggests he was part of something big. Turns out, his name is Jason Bourne. And he's an assassin, and a good one. But now, he's on the run with the girl, in order to figure out more about his past, and not die.

As I watched the film, I was constantly reminded of another action film I saw recently: The Fugitive. The Fugitive was a 90's …

The man who retrograde amnesia adopts the identity of Jason Bourne (Matt Damon), only remembers the account number to a safe deposit box. Marie Kreutz (Franka Potente) is approached by Bourne and is offered $20,000 to take him to Paris. Alexander Conklin (Chris Cooper), the head of Treadstone, reveals to his superior Deputy Director Ward Abbott (Brian Cox), that Bourne was the covert operative responsible for a failed assassination attempt on African dictator Nykwana Wombosi (Adewale Akinnuoye-Agbaje). "The Professor" (Clive Owen) is involved with a mission of Bourneâs.

It boasts one of the best and fresh fight scenes on screen. The plot became clear towards its conclusion and lines were a bit uninvolved at times because of the storyâs pace. Damon and Pontente have good …

"The Bourne Identity" by Yojimbo

A fishing vessel rescues a bullet-riddled amnesiac from the ocean and upon reaching shore, he discovers that not only is he a world class ass kicker but nearly every government agency in the world seems to want him dead. Along with Ronin, The Bourne Identity heralded a new era of high octane grittiness for the action thriller and a decade on, it actually stands up pretty well. Of course the "hi tec" aspects look a little dated, but it's still a breathlessly exciting conspiracy thriller that dispenses with any irrelevances and gets straight down to the bare bones of a tire screeching, bone crunching rollercoaster ride. Matt Damon is the perfect combination of hard case and bemused victim and Franka Potente makes a much more interesting romantic interest than the generic dead-eyed bimbette …

The Bourne series is really good .....especially the action sequences.

I am both worried and optimistic. Primarily because it ended the same way it began. And, while I have not read the books, I hope he accepts what he signed up for and it gets more clever.

I am not sure how I feel about this.&amp;nbsp; I like the series OK.&amp;nbsp;&amp;nbsp; I think Damon is born for the role.&amp;nbsp; But I don't think it has the suave or the intelligence of the bond series to carry own.&amp;nbsp; The mystique of bond is actually better than the bond movies themselves (in my opinion).&amp;nbsp; I think Bourne would have to find some kind of &quot;edge&quot; to be successful long term. Of course...I don't really care for sequels though :)

Nice that is pretty good to here. I didn't know how many they were going to do but maybe this could be like the next Bond and he could cooler gadgets.

Hey all! It was just announced that the Bourne legacy will carry on, there's a writer on board, and so more movies are coming about our favorite Matt Damon role. Here's a link: http://www.hollywoodrepor ter.com/hr/content_displa y/film/news/e3i602dec9570 e51e546848a62ac971c97aBourne Identity, The