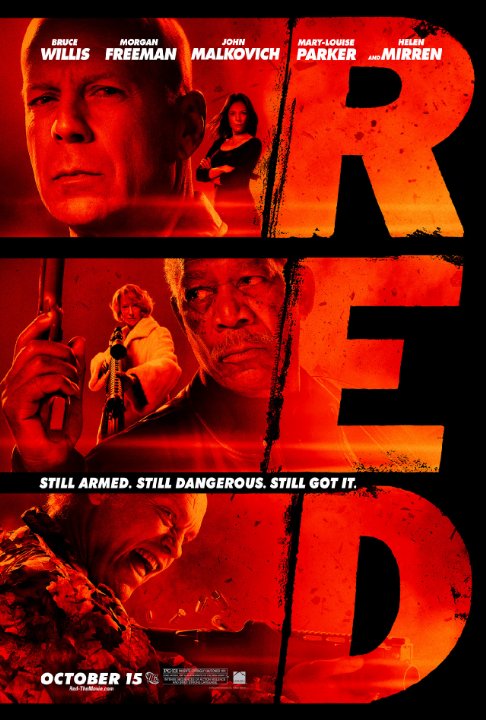 Plot: A former black-ops agent finds himself the target of assassination and in order to survive, reaches out to his former team. -- Chris Kavan

Quite a cast in this one. Old killers vs. younger bad guys. Great to see Helen Mirren blasting away with a machine gun. For some reason I didn't think I'd enjoy this. Glad I changed my mind.

Red was definitely way better then I expected & has to be 1 of the best action comedies I've seen in awhile now.For some reason, It's not a movie I want to go out & buy but I am hoping there will be a sequel

A retired CIA operative is targeted for elimination and so he reunites with his former colleagues to strike back at the assassins. RED is a comic strip action film based on a DC Comics series about ex-spies who come out of retirement and teach the new young whipper-snappers how it's done. The tone is very light-hearted despite the amount of fire power on show and it embraces the concept of "geriaction" wholeheartedly. I must admit I was expecting something a little more substantial considering the heavyweight cast however, as RED is little more than an episodic series of shoot outs combined with a few quips about ageing. The quality cast do keep the story entertaining enough, although it is slightly cringe worthy watching an actor of Malkovich's calibre gurning and prat-falling like an …

The former John McClane plays Frank Moses, a former CIA operative, who is so bored in retirement that he spends his days sitting around the house, reading trashy romance novels and intentionally rips up his checks just so he can have a reason to telephone pension clerk Sarah Ross (Mary-Louise Parker).

After a rather intense invasion of his home by mysterious gunmen, he travels to Kansas City, and kidnaps Sarah, fearing that the people, who want him dead, may also want to kill her. He is therefore a little put out when Sarah reacts to his unheralded arrival in her apartment by screaming and objecting to being kidnapped and his lack of hair.

Frank discovers he's been labeled RED (an acronym, in CIA terminology for Retired and Extremely Dangerous) and decides to get to the bottom of …

Ah, the life of retirement - whether you're flirting with a pension operator, arranging flowers, enjoying the nurses at the retirement home or sitting back with a nice bottle of vodka - your daily routine becomes your life... unless the life you retired from happens to be an ultra-secret black ops organization.

That is the premise of Red (acronym of Retired, Extremely Dangerous) - after doing lord knows what for the government all these people want to do is sit back and relax, well, some take the odd job on the side, but mainly they want to relax. Too bad that a hit squad is sent in to take them out. Too bad for the hit squad, that is, as the AARP members don't take getting killed to easy.

It's fun watching some serious actors having a good time. Bruce Willis is known for action …

No posts have been made on this movie yet. Be the first to start talking about Red!