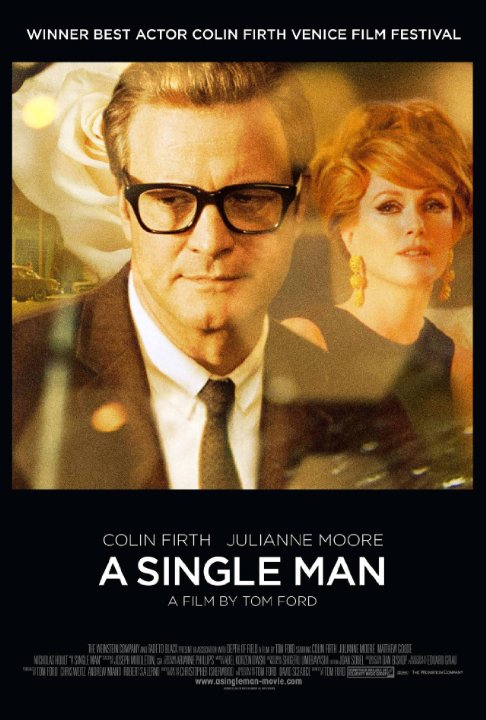 Plot: A college professor who happens to be gay struggles to get through the day and envisions an end to his life. Takes place during the mid 20th century, where gay sexuality is not accepted. Colin Firth's character is not allowed to be part of his lovers family at the time of his death and funeral.

This movie takes place during the mid 20th century, where gay sexuality is not accepted. Colin Firth's character is not allowed to be part of his lovers family at the time of his death and funeral. Colin Firth in this movie was so brilliant and so believable in his character that you felt the pain and hard work that he was going throw in this movie. The only problem that I had in this movie is that the film slowed down at times and other characters in the film that are forgettable.

Amazing actors performance, half of the dialogue is with corporal language; about how a life could change after lost someone loved, and how it could return a sense of refresh. Is not a "nice" movie, although, like Carlos says: "Sometimes awful things have their own kind of beauty."

This is a movie about visual cues and nuances. First-time director Tom Ford's attention to detail in crafting this slow-building story about appreciating relationships is magnificent, especially for a debut film. Colin Firth proves that he is one of the great actors of this generation yet again.

A Single Man is not a movie for everyone. If you prefer to not watch movies about gays this may not be for you. Much like "Milk" of 2008, this may not sit well with some. For me, it is a beautiful movie with great music, amazing performances and a good story.

The highlight of this film is Tom Ford's direction. It is not perfect as the pace seems off at times, but the cinematography, the acting, the setting, and a few other aspects can be attributed to his talent. Though I never lived in the 60's it really seemed like th 60s. The costumers, the music, the home decor was great.

Now the story may have been told before but not really this way (at least that I have seen). I compare this to Revolutionary Road (and I can't say which is better). If you like a solid, well directed, and …

No posts have been made on this movie yet. Be the first to start talking about A Single Man!